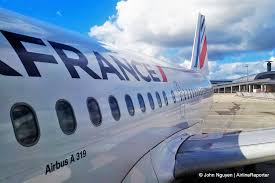 Air France is set to resume Paris-Tehran flights on Sunday.

Air France is set to resume Paris-Tehran flights on Sunday after a row in which the carrier’s air hostesses and female pilots objected to Iran’s rules requiring them to cover their heads whenever they are not on board planes.

With sanctions lifting, the French flag carrier is returning to Iran’s market after eight years. The company said that female staff are allowed to refuse to work on the Tehran route without facing punishment, but those who do fly into Iran will have to follow local Islamic law and wear a veil.

Frequent flyers to Iran on other carriers say the sudden donning of head scarves is a common sight as planes come in for a landing.

“All of a sudden, all Iranian women look different,” said one European male visitor. “It is an astonishing scene.”

Many Iranian women are creative in challenging the headscarf obligation, in place since the 1979 Islamic Revolution, and cover as little as possible, but most foreign female passengers fully hide their hair and body curves on fears of punishment.

“The first time I flew to Tehran I looked more Islamic than all Iranian Muslim women on board,” said the Catholic spouse of a western diplomat in Tehran. “I had no make-up and wore a big scarf and the biggest shirt and trousers . . . and could not believe the contrast with fashionable Iranian women.”

Although alcohol is banned in Iran, Air France plans to operate a full catering service, including alcohol, on board its thrice-weekly flights. On the ground, the Islamic Republic is not strict about enforcing the law against the use of alcohol as long as it is drunk in private houses.

European airlines that left Iran due to the country’s tensions with the western world over its nuclear activities, have been gradually coming back since the centrist government of Hassan Rouhani swept to power in 2013 and sought a detente policy.

Austrian Airlines was the first to relaunch its services to Tehran in 2014 and British Airways will start offering six flights a week to Tehran on July 14. Lufthansa and Alitalia never left Iran.

Following the landmark nuclear agreement Iran reached last year with six major powers — US, UK, France, Russia, China and Germany — sanctions began lifting, and the Islamic regime made renovation of the country’s ageing aeroplanes one of its top priorities. It needs about 500 new aircraft

Iran’s fleet has an average age of 25 years old and includes some aircraft that predate the 1979 revolution. Air disasters have cost about 1,200 Iranian lives since then.

The first major deal after the nuclear accord was signed earlier this year with Airbus agreeing to sell Iran Air 118 aircraft. No planes have been delivered and Mr Rouhani’s government is struggling to secure financing for $25bn worth of jets.

Meanwhile, Boeing is the first American company since the revolution to publicly hold talks with Iranian authorities in Tehran. Executives from the US plane maker visited Tehran last week, but few details have been released been released.

Safe Iranian flights and increase in the number of foreign flights are crucial for Iran’s ambitions to attract up to $50bn of investment annually.

Iran is hoping to boost tourism to its historic sites at a time when its relative security in a volatile region has made some Middle Eastern tourist destinations — notably Syria — inaccessible for the foreseeable future.

The new flights come at a time when Tehran is hosting many western and Asian business delegations who are seeking to tap Iran’s newly open market.

Passengers on Air France’s maiden flight on Sunday include a number of dignitaries, including the airline’s chief executive Frédéric Gagey, French minister of state for transport, marine affairs and fisheries, Alain Vidalies, former French foreign minister Huber Vedrin, according to a western diplomat in Tehran.

The resumption of European flights will also make life easier for the country’s expatriate community, who have had to travel to Turkey, UAE and Qatar for connections.

Iranian airlines are also benefiting from the lifting of sanctions because they can now buy fuel in the west and do not have to stop in Central Asia, Ukraine and Turkey to refill their tanks. “It was such a pleasure to fly Iran Air direct from Heathrow to Tehran,” said Laila, a businesswoman. “But I dreaded the old plane and cannot wait for the new Airbuses and Boeings to arrive.