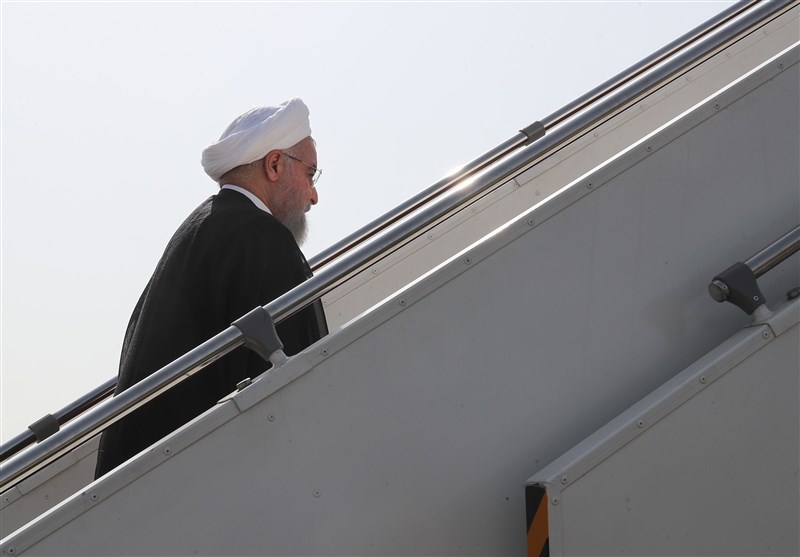 Following controversial strikes by Iran or its allies on the world’s single most important oil facilities and threats that the US was “locked and loaded” in preparation for an attack, Iran’s leaders did not hunker down in bunkers waiting for the bombs to start dropping.

Hassan Rouhani, president of Iran, and Mohammad Javad Zarif, his foreign minister, instead went to Ankara, in a meeting that included Nato member Turkey’s president Recep Tayyip Erdogan, joking with president Vladimir Putin as he mocked US defence systems. Days after the attack, an Iranian official travelled to China to talk about a series of proposed mega deals that would potentially deepen Sino-Iranian economic cooperation and integrate Iran into Beijing’s belt and road programme.

With secondary sanctions forcing Europe to abscond from doing much of any business with Iran, the administration of Donald Trump may have believed that by pulling out of the nuclear deal last year it had Tehran cornered, forcing it to return to the negotiating table and hand him “a better deal”, or at least a photo op, just in time to herald a major foriegn policy success ahead of 2020 elections.

But with Russia providing steadfast diplomatic cover and China possibly considering investments in the country’s energy sector and industry, Iran is confident it can ride out Trump, even if he wins a second term in 2020 elections.

Sanctions are damaging Iran’s economy, stymying its development goals, angering its population, and perhaps even curtailing its regional ambitions. Iran’s hardliners have been lashing out militarily via proxies and with grey zone attacks on global tankers, and very likely against a crucial Saudi oil facility. Tehran has also variously hinted at or rejected the possibility of talks with the US, while its diplomats try to secure $15bn (£12.2bn) in credit to plug holes in its budget.

But beyond its quotidian needs, Iran also has a plan B, and it involves further enmeshing itself in an emerging Eurasian network of nations dominated by China and Russia, both of which are in competition with the US and eager to undermine it.

The political and economic integration of Eurasia is part of a slow-moving, long-term trend that is not going to solve Iran’s immediate problems. But the phenomenon gives Iranian leaders confidence that they can wait out Trump.

“This will not impact our approaches to Iran,” said Zamir Kabulov, a Russian foreign ministry official, according to RIA Novosti. “We will continue to cooperate with Iran in the banking sphere as planned.”

Iran’s Central Bank governor said Russia and Tehran have linked their banking systems to bypass the SWIFT network, which the US can monitor.

“We can carry our banking relations with Russia and, in the future, with the Eurasian Economic Union and other regional states through this channel,” Rouhani was quoted as saying.

Trade between Russia and Iran is minimal. But the two countries are allied in figuring out ways to overcome US sanctions. “Russia sees Iran as a case study in mitigating the effects of sanctions, and has therefore engaged in dialogue with Iran about mechanisms, such as new banking messaging systems, that would serve to better shield their economies from the impact of US sanctions,” said Esfandyar Batmanghelidj, an expert on Iran’s economy.

In an announcement on Thursday that hinted at the extent of China’s cooperation with Iran, the US Treasury Department designated five Chinese individuals and six companies as violators of American sanctions for allegedly helping in the transport of Iranian oil.

There’s little evidence that China is increasing its already significant investments in Iran, which is a pittance for Beijing. But Washington’s moves against Iran have heightened Tehran’s importance to Beijing. “Economically speaking, it is easy for Chinese companies to shift their focus away from Iran and to other markets,” said Batmanghelidj. “Politically speaking, it is difficult for the Chinese government to capitulate in the face of US sanctions.”

And while Iran constantly complains about the European Union, United Kingdom, France and Germany – all cosigners of the nuclear deal Washington violated – it complains very little about Russia and China.

“The nature of Iran’s relations with China and Russia is different than with Europe,” said Abas Aslani, editor-in-chief of Iran Front Page and a visiting scholar at the Centre for Middle East Strategic Studies in Tehran. “Iran might be counting on cooperation from China and Russia through different channels. But if Europe cooperates with Iran it has to operate on a more open channel.”

Neighbouring Turkey, led by Erdogan with his Eurasianist outlook, also has Iran’s back. Even as western diplomats say large Turkish companies are mostly shying away from doing business with Tehran for fear of sparking the ire of the Trump administration, they concede that Iranians have become expert at devising financial mechanisms in places like Turkey or Iraq to evade US restrictions.

In an interview with the US Fox News network, Erdogan dismissed US claims that Iran was behind the attack on Saudi oil facilities, and criticised the US sanctions.

“I don’t think it would be the right thing to blame Iran,” he said. “The evidence available does not necessarily point to that fact. We are neighbours with Iran, and I know that sanctions never solved anything.”

President George W Bush tried to pressure Iran on its nuclear programme and its regional activities but ultimately failed, with Moscow and Beijing regularly thwarting western efforts to punish Tehran at the Security Council. President Barack Obama managed to impose tough sanctions on Iran that even China and Russia abided by because he slowly assembled a diplomatic front, utilising the toxicity and belligerence of Iran’s then president Mahmoud Ahmadinejad to galvanise support for tough international sanctions on the Islamic republic.

Trump’s unilateral withdrawal from the deal probably takes any kind of tough international sanctions against Iran off the table, and his belligerence on a number of global matters actually provides an incentive for Moscow and Beijing and others to band together with Tehran.

“Iran, Russia, Turkey, and China have something in common in that they have been facing pressure from the Americans,” said Aslani. “They think they find common ground. The more cooperation, the more support they can receive from each other whether in the Security Council or elsewhere. As much as the unilateral approach of Donald Trump is a danger to Iran, it’s a danger to Russia, China and other countries.”

Source: Iran has a plan B thanks to China and Russia – and it just might thwart the Trump administration: INDEPENDENT