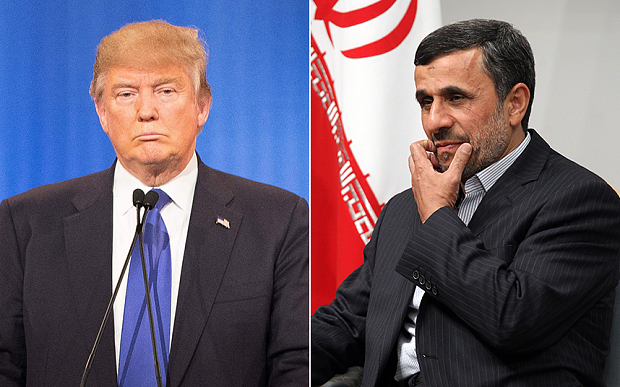 Watching Donald Trump these past few months has reminded me of another rabble-rousing demagogue whom that I spent much time observing.Not Adolf Hitler or Benito Mussolini – my time in journalism, though extensive, does not reach that far back – but of Mahmoud Ahmadinejad, the fiercely provocative former president of Iran who, like the Republican frontrunner, blended headline-grabbing wild statements with profound ignorance of world affairs in a toxic cocktail.Yet after Thursday night’s debate in Detroit, I have concluded that even Mr Ahmadinejad – objectionable as he was was with his Holocaust denials and relentless Israel-baiting – is surpassed by Mr Trump for sheer obnoxiousness towards others.The billionaire reality television star’s belittling of Marco Rubio as “this little guy” and “little Marco” was a disgrace that displayed a lack of class and sheer human decency.

During a live televised debate with Mir-Hossein Mousavi, his main challenger in the 2009 Iranian presidential election, Mr Ahmadinejad behaved shamelessly and patronisingly. Yet even he did not stoop to the level of insulting an opponent’s physical characteristics.

Mr Trump’s vulgar, cretinous behaviour is debasing the American the political process and it is worth asking when the American public supporting him will realise that they are being taken – apropos Mitt Romney – for fools. If Mr Rubio is a “little guy”, how does the ever-imperious Mr Trump consider the millions of Americans whose myriad economic frustrations have infused the current campaign with so much anger?

Mr Trump says he hates the term “politicians” but it is surely better – at least no worse – than what he is bringing to the table.

Iran set to elect record number of women into parliament | World news | The Guardian
Iran’s hardliners down but not out after poll defeat – FT.com
Comment