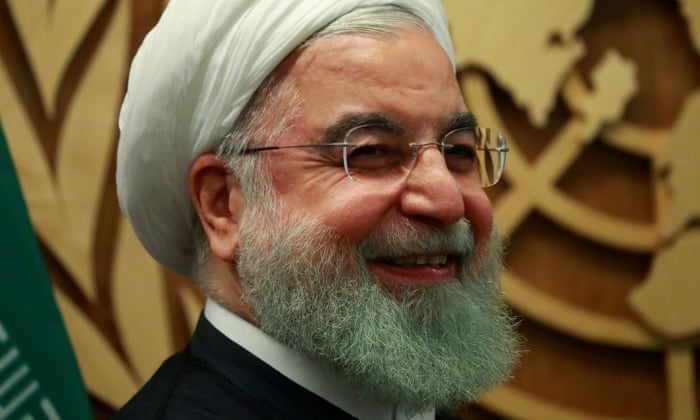 Iranian president tells cabinet the country had been ready to accept terms of French UN plan.

The Iranian president, Hassan Rouhani, has told his cabinet that while the country had been ready to end its nuclear stand-off with the US broadly on terms set out by France at the United Nations, Donald Trump was not prepared to make public an apparent private offer to lift sanctions.

Although his account is inherently not impartial, it is the fullest version of behind-the-scenes diplomacy at the UN general assembly provided by the Iranians.

Rouhani’s claim came as the supreme leader, Ayatollah Ali Khamenei, delivered a harsher message, saying that Iran would continue to reduce its commitments under the nuclear deal until it achieved its goals. It has taken three steps away from the deal, one every 60 days since May, and is threatening a fourth in November.

Insisting the path of diplomacy was not yet closed, Rouhani thanked the French president, Emmanuel Macron, for his intensive six hours of diplomacy at the general assembly, and said the blame for the failure of the talks lay with Washington.

Macron shuttled between Iran and the US in a bid to forge a deal in which Iran renounced any nuclear ambitions in return for the US lifting sanctions on Iranian oil exports, the life blood of the Iranian economy. The four-point document brokered by Macron in New York states: “Iran will never acquire a nuclear weapon” and will “fully comply with its nuclear obligations and commitments and will accept a negotiation on a long-term framework for its nuclear activities”. It would also “refrain from any aggression and will seek genuine peace and respect in the region through negotiations”.

The US would in return lift sanctions on Iran. Macron even prepared a telephone line for Rouhani to speak to Trump, bur Rouhani refused to use it.

Although Iran says the French document does not fully reflect the Iranian position, Rouhani said Iran could have accepted the trade-off inherent in the French plan.

Rouhani added: “This was the principle that France had put forward with the Americans, and then it had been raised with us, so the principle that is now widely circulated in newspapers and publications around the world, and the French president himself has confirmed, is correct.

“We came together, and the one that prevented the outcome was the White House, and Iran, Paris, Tokyo and the rest of the countries were not to blame”.

He complained that the US had told Europeans in private messages that it was ready for a deal, but in later statements twice declared that it would tighten its boycott. He asked: “How can we believe and persuade the Iranians that we would not be deceived by the private message?”

He added: “The American president on two occasions, once in his speech at the United Nations and another time, said explicitly that we want to intensify sanctions. I told these European friends, so which part should we accept? Should we accept your word that you say America is ready?” The Europeans, he added, had no answer.

In the end, Rouhani said, such an important matter could not be resolved in a matter of hours.

“Of course it was important for the Americans to turn this into a news bomb and thereby change some of their domestic conditions, but we do not care what their purpose is. For us, national interests matter”.

Overall, Rouhani gave an account of a country that had withstood unprecedented economic pressures and was now an enhanced player in the world. “In the visit to the United Nations headquarters, politics and diplomacy were revolving around where the Iranian delegation was, and everybody wanted to hear about regional dynamics and global politics from Iran.

“They all felt that Iran’s actions can even affect the United States’ domestic politics as well.”

Rouhani noted: “What we felt at the end of our short stay in New York was that the negative atmosphere the enemy sought to create around Iran had been destroyed and other conditions had arisen, especially as we were heralding peace and discussing the Hormuz peace initiative that we presented.”

Claiming that the anti-Iranian lobby had attempted to create an atmosphere in which Iran would be portrayed as the country unwilling to negotiate, he said that within two hours of reaching New York, Iran had been able to break the conspiracy they had designed and insist that Iran is not fleeing the negotiation table.

“All Europeans have told me that your power today is greater than a year ago,” the president told his cabinet.

He also gave a highly optimistic account of the state of Iran’s besieged economy, saying that the value of the national currency was rising and inflation falling month on month.

Source:  Trump to blame for failure of US-Iran nuclear talks: The Guardian