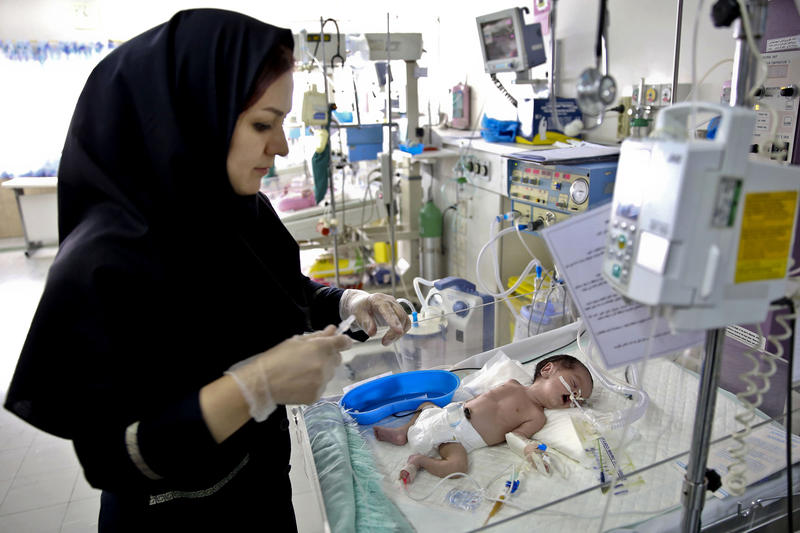 HT Health Tec, a German health care company, is all set to start building a hospital in Iran.

It follows a surprise request made by Iran’s vice health minister Iraj Harirchi during a visit by Bavarian company representatives last fall.

“When it’s agreed, it could take 24 months to build a hospital with 400 beds,“ Alexander Vonscheidt, a senior sales manager at the company, told Handelsblatt Global Edition. “We’d be part of a bigger consortium working with architects and construction firms. Siemens, Trumpf and Heilbron are other Bavaria-based health companies that could be part of a turnkey project.”

HT Health Tec builds hospitals, including operating theaters and safety labs, but wound down its business with Iran over the past few years because of sanctions imposed by world powers. Those sanctions were lifted in January following last year’s deal to curb Iran’s nuclear ambitions.

After a decade cut off from Western markets, Iran needs everything: trucks, cars, machines, power stations, medical technology and consumer goods, for a population of 80 million. The need for drugs and medical equipment is particularly pressing.

However, companies from all industries are in limbo as sanctions on Iran remain largely in place, hampering banks’ ability to engage in the country. United Nation sanctions concerning Iran’s nuclear program have been lifted but many imposed by the U.S. government still stand concerning terrorism and human rights, for example, and financial sanctions affect countries beyond the United States.

“A lot of companies thought that after the nuclear deal, the risk of doing business with Iran was minimal,” said Mark Hibbs, senior associate in Carnegie’s Nuclear Policy Program. “Many of the sanctions remain in place, however.”

Blocked Hermes credits are another complicating factor, due to unpaid bills. These are export credit guarantees given by the German government. Under the guarantees, if exporters’ partners don’t pay, their business will be covered.

Currently, Iran owes €500 million in unpaid Hermes bills, Mr. Hibbs said, adding he expects the governments to resolve this issue but that it is an additional hurdle to business until the credits are available again. “That’s a separate issue but a direct, real-time issue, it’s more immediate for companies that are interested in doing business in Iran,” he said.

Another factor is reporting requirements. German companies doing business in Iran and in the United States have disclosure obligations that some of the companies can’t meet. They have to provide details of financial transactions for transparency but many exporting companies found it “extremely difficult to get solid information about creditworthiness and the risks of doing business,” Mr. Hibbs said.

He noted that at a meeting of smaller and mid-sized companies from Germany, many said they feared negative publicity and the possible effects on their business. “If Iran is portrayed as a rogue state, that could hurt their reputations,” he said.

“As a German company, we’re under no illusions: Regular business will only start after U.S. banks begin dealing with Iran again,” Martin Herrenknecht, chief executive of a tunnel drilling company of the same name, told Handelsblatt. “Then the German banks follow suit.”

Drugs made in Iran are cheap but seen as poor quality, according to Djavad Salehi-Isfahani, an economics professor at Virginia Polytechnic Institute and State University who comes from Iran. Sanctions, he noted, add a 30 percent premium on anything imported.

“People do pay this as there’s a lot of suspicion that Iranian drugs are substandard and ineffective,” he said in an interview.

Although medicines were exempt from sanctions, Iran’s pharmaceutical sector has faced severe difficulties for years. Sanctions on the country’s banking system meant few pharmaceutical raw materials could be imported and there are shortages, particularly of more advanced medicines, according to Business Monitor International.

For hospitals and health care institutions, buying a cat scan from the United States was a huge headache because they couldn’t sell them for fear they’d be hunted down by the U.S. Treasury.

Local manufacturers struggled to make up for the shortages. Looking ahead, Mr. Salehi-Isfahani said he expected local drug companies would try to find partner companies abroad. “This would help convince buyers that the drugs are of high quality,” he said. “If they can convince people the drugs are made abroad and that they are raising the quality standard through cooperation, that’s very important.”

Health companies from Germany are monitoring the situation. Günther Forneck, a communications manager at drugmaker Bayer, told Handelsblatt Global Edition that the pharma company’s revenues in Iran are only a very small proportion of its overall sales. “We believe our products, particularly our health care and agrarian products, are also needed in Iran and see further business potential as sanctions are lifted,” he said, adding that the company’s planning depended on the concrete way that sanctions were lifted and that Bayer was watching developments.

Iran’s hospitals also need equipment, which they may find easier to buy in the future than in the past. “For hospitals and health care institutions, buying a cat scan from the United States was a huge headache because (American companies) couldn’t sell them for fear they’d be hunted down by the U.S. Treasury,” Mr. Salehi-Isfahani said.

Siemens is also looking forward to the Iranian market opening again. “Siemens’ history in Iran dates back to 1868 and we’ll now be stepping up our efforts toward continuing this long tradition,” a Siemens spokesperson told Handelsblatt Global Edition. “We want to support Iran in the future development of its infrastructure such as the energy sector, rail transportation and healthcare.”

Siegfried Russwurm, a management board member of Siemens who visited Tehran last fall in the same business delegation as Mr. Vonscheidt, said there was a need for a digital link between highly technical university hospitals and satellite hospitals that could be connected through telemedicine and digital methods. “That’s exactly what this country needs and that’s where we want to build up our collaboration,” Mr. Russwurm said in an interview at the time.

Fresenius, a German health care company that makes medical technology, was also careful to note that health care was not covered by sanctions and that the company maintained relations with Iran supplying medicines.