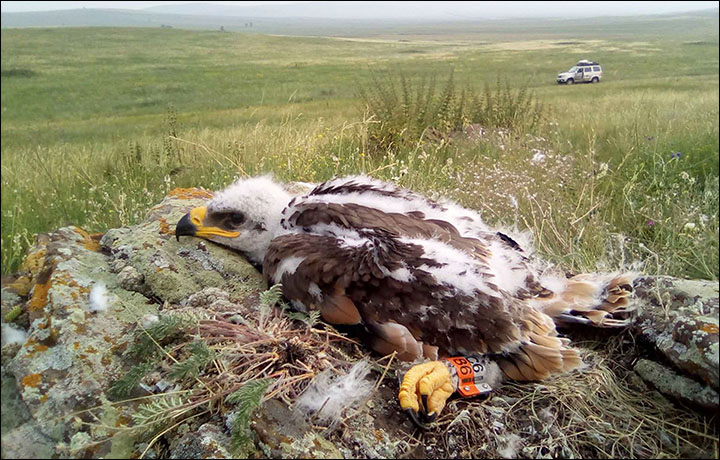 Russian scientists in Siberia have been tracking the flight routes of migrating steppe eagles.

GPS trackers were attached to 13 birds; their initial flights from Russia to neighbouring Kazakhstan was observed.

One eagle named Min, born in the Russian republic of Khakassia remained for much of the summer in an area of Kazakhstan outside cell phone coverage.

Here she stored a large number of messages specifying her location, but they could not be sent at Kazakhstan’s reasonable roaming rates.

Then she overflew Uzbekistan and Turkmenistan as well as Iran and Saudi Arabia before returning to a garbage dump in Iran.

Her routing is shown in red on the map.

it was here that accumulated stored messages from the summer were all sent in one go – at a roaming charge of 49 roubles ($0.75) per message, leading to bills totally hundreds of dollars.

Novosibirsk ornithologist Elena Schneider said: ‘She sent us hundreds of expensive SMSs with her summer locations, spending the entire collective budget for our eagles.’

Another eagle called Khakas (grey on the map) is hanging out at a site close to the border between hangs out in the dump on the opposite side of Turkmenistan and Uzbekistan.

Depending which side of the border he is, the text messages he sends are either reasonably priced or expensive.

Elena urged followers on her Telegram channel: ‘Friends! Comrades! Readers! We have opened for everyone a unique opportunity to top up the eagle’s mobile.

‘Since Min has already exhausted the eagle budget, and expenses are still serious.

‘We cannot let the eagles stop broadcasting – this is a very important study with interesting results.

‘We are looking for sponsors, but for now we hope to support the eagles in small amounts from all sympathisers at least until the end of the year.’

Meanwhile there is a map to follow the routes of the steppe eagles: http://rrrcn.ru/ru/migration/se2018

Min seems to have moved on now to Saudi Arabia. The map also highlights her earlier travels which saw her reach India.