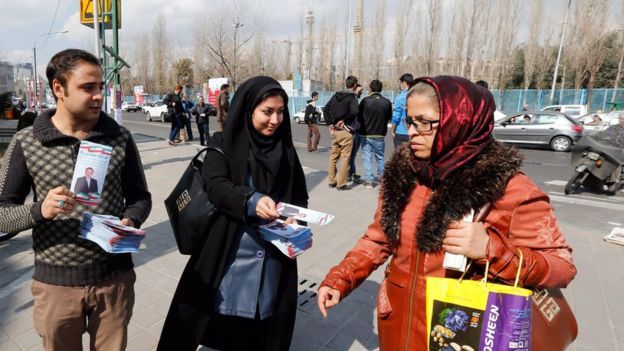 Iranians go to the polls on 26 February in key elections: one for a new parliament, and the other for the top clerical body that appoints the country’s most powerful official, the Supreme Leader.The ballots, which are the first in Iran since the nuclear deal and the lifting of sanctions, will test the public mood and indicate the direction the country is heading.Does Iran’s parliament really matter?Image copyrightAFPImage captionPresident Rouhani received praise after the nuclear deal ended years of stand-off with the WestThere are 290 MPs – and some 6,000 candidates. There are no real political parties but MPs divide into blocs, some supporting a moderate agenda, others taking a hardline stance.Since President Hassan Rouhani signed the nuclear deal last July, the struggle between these two camps has intensified, with hardliners resisting his attempts to follow success on the foreign policy front with political reform at home.MPs must approve all cabinet appointments and new legislation. So the president needs a good working relationship with parliament in order to make things happen.President Rouhani is now more than half-way through his first term and needs backing from MPs to push through long-awaited economic reform as well as to support his bid for re-election in 2017.

The Assembly sits for an eight-year term, so it will have a far longer influence on Iranian politics than parliament.The current Leader, Ayatollah Ali Khamenei, is 76 years old, and has suffered poor health, so it is possible that the next Assembly of Experts will have to choose his successor. That has given an added impetus to this year’s vote.A total of 161 candidates are contesting 88 Assembly seats. As in parliament there is intense rivalry between hardline conservatives who dominate the Assembly, and more moderate candidates.Many moderates have been disqualified, among them Hassan Khomeini, the well-connected grandson of Ayatollah Khomeini, the founding father of the Islamic Republic.President Rouhani and former President Akbar Hashemi Rafsanjani are standing for re-election, are expected to try to form a bloc of more moderate members to reduce the influence of the ultra-conservatives on the Assembly.