Home » Iran Hints at Retaliation Over U.S. Use of Seized Assets 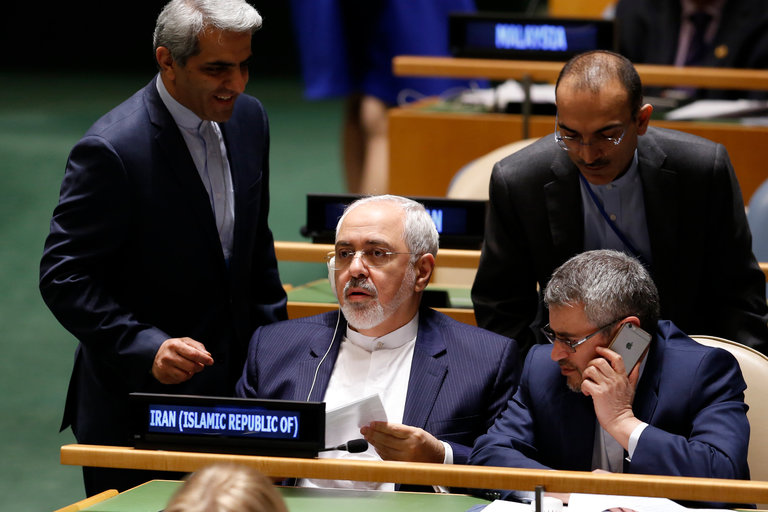 A letter to the United Nations secretary general by Iran’s foreign minister was among the most strident yet in a steadily increasing display of anger.

Iran escalated its invective against the United States on Thursday over the court-ordered use of nearly $2 billion in seized Iranian central bank assets to compensate American victims of terrorist attacks overseas, calling the action “an outrageous robbery” and threatening unspecified retaliation.

The criticism of the United States, in a letter by Iran’s foreign minister to the secretary general of the United Nations, was among the most strident yet in a steadily increasing display of anger from Iran over American use of the assets, validated in an April 20 decision by the Supreme Court.

The decision concerned compensation claims by more than 1,000 Americans — survivors and relatives of people killed in attacks that the American authorities have attributed to Iranian operatives — despite Iran’s denials of responsibility. The attacks include the 1983 truck bombing of a Marine base in Beirut, Lebanon, and a 1996 truck bombing in Khobar, Saudi Arabia.

Iran had previously called the Supreme Court decision a form of theft and had suggested it might sue the United States in the International Court of Justice to block the ruling from taking effect. But Thursday appeared to be the first time Iran suggested it might be planning a reciprocal response.

“The entire court proceedings which led to the recent ruling has been fake and phony and a travesty of justice in every sense of law, jurisdiction, merit, fact and process,” the foreign minister, Mohammad Javad Zarif, wrote in the letter to Secretary General Ban Ki-moon, which was released by Iran’sUnited Nations Mission.

“The Islamic Republic of Iran holds the United States government responsible for this outrageous robbery, disguised under a court order, and is determined to take every lawful measure to restore the stolen property and the interest accrued to it from the date it was blocked by the United States,” Mr. Zarif wrote.

The letter denounced what Mr. Zarif described as a history of United States arrogance toward Iran and other sovereign states through the use of American courts to seek collection of civil judgments from them. He called it a “dangerous practice of defying international law.”

He recounted Iran’s grievances with the United States, beginning with what he called the C.I.A.-supported overthrow of the government in 1953, American support for the former shah’s secret police, American backing for Saddam Hussein in the Iran-Iraq war, and the shooting down of an Iranian jetliner in 1988 by American naval forces in the Persian Gulf.

“It is in fact the United States that must pay long overdue reparations to the Iranian people for its persistent hostile policies,” Mr. Zarif wrote.

“The Islamic Republic of Iran reserves the right to take appropriate lawful action, including necessary and proportionate countermeasures, to restore and protect the rights of the Iranian people against such persistent unlawful conduct by the United States,” he wrote.

Mr. Zarif asked for Mr. Ban’s help “to induce the U.S. government to adhere to its international obligations” by releasing Iran’s assets and asked that Mr. Ban circulate the letter as a document in the General Assembly and Security Council. There was no immediate comment from Mr. Ban’s office or the State Department.

Authorship of the letter in Mr. Zarif’s name was significant in part because he has been among the staunchest defenders of seeking improved relations with the United States.

Mr. Zarif and Secretary of State John Kerry were among the lead architects of the landmark agreement reached in July that curtailed Iran’s nuclear activities in exchange for eased economic sanctions. Both sides expressed hope that it could lead to improved diplomatic ties.

On Wednesday, President Hassan Rouhani of Iran, elected in 2013 partly on promises of achieving that nuclear deal, castigated the United States over the Supreme Court decision, calling it a “flagrant theft and legal disgrace.”

Source: Iran Hints at Retaliation Over U.S. Use of Seized Assets – The New York Times