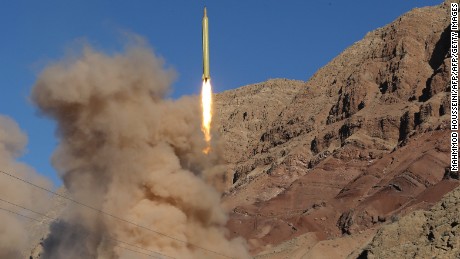 The missiles, capable of reaching Iran’s archenemyIsrael, were marked with a statement in Hebrew reading “Israel must be wiped off the Earth,” Iran’s semiofficial Fars News Agency reported.

The phrase originates from a remark made by the Ayatollah Ruhollah Khomeini, the founder of Iran’s Islamic revolution. CNN has not independently confirmed this report, and Iranian media have not shown photographs of the message.

The firings took place on the second and final day of a large-scale military drill, which marked the first time Tehran has fired ballistic missiles since signing a deal with world powers on its nuclear program in July.

U.S. officials said that the first tests did not violate the nuclear agreement, known as the Joint Comprehensive Plan of Action (JCPOA), but were very likely in breach of a U.N. resolution calling on Iran not to undertake ballistic missile activity.

Iran’s state news agency IRNA reported Tuesday that the head of the Islamic Revolutionary Guards Corps had said that the drill had Iran’s enemies “shivering from the roar” of the missiles.

The commander, Maj. Gen. Mohammad Ali Jafari, said that since Israel — referred to as the “Zionist regime” — was within range of the missiles, it was “quite natural” it would be concerned, IRNA reported.