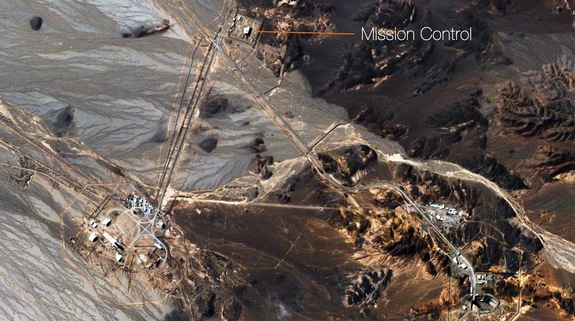 Iran may attempt to launch a satellite into space soon, recent imagery collected by a high-definition camera on the International Space Station suggests.The imagery — which you can see in this annotated video — shows heightened activity at Iran’s Imam Khomeini launch facility, say representatives of Vancouver, Canada-based Urthecast, which owns the Iris camera that captured the footage from the exterior of the space station on March 2.The Iris imagery “shows increased activity in the area, suggesting that a launch of the Simorgh SLV rocket — built to send satellites into space — is fast approaching,” Urthecast representatives wrote in a statement.

Iran has been ramping up its rocket and missile activities recently. Last week, the country conducted several missile tests; U.S. officials believe some of these trials may have violated a United Nations resolution

The U.S., Israel and other nations have long been concerned that Iran aims to develop nuclear arms, and that the nation is developing its rocket and missile technology

partly as a way to deliver these devastating weapons to faraway targets. Iran has denied these claims, saying its nuclear research activities are focused on energy generation.

Last July, Iran, the U.S. and several other country signed a landmark deal designed to keep Iran from developing an atomic bomb, while at the same time allowing the nation to keep a nuclear program going for peaceful purposes.

United States Vice President Joe Biden said last week that the U.S. “will act” if it turns out Iran has violated the terms of the nuclear deal, CNN reported.

Iris was delivered to the International Space Station in November 2013, along with another UrtheCast camera called Theia. Both were installed on the orbiting lab’s exterior by spacewalking cosmonauts in January 2014.

Iris records HD video with a resolution of about 3 feet (1 meter), while Theia takes photos that can resolve features 16.5 feet (5 m) across. The business plan of UrtheCast (which is pronounced “Earthcast”) calls for selling Iris and Theia imagery to a variety of customers, for a variety of purposes.