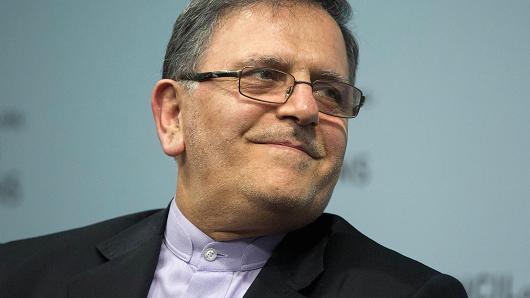 Iran has a message for the world’s financial institutions: We want to do business again.

Representatives of the Iranian government met the week before last with the Financial Action Task Force, the international body that has blacklisted the country from the global financial system. It was the first such meeting in eight years, and Iran’s willingness to do so may signal that it isn’t getting as much economic pop from the end of nuclear sanctions as it hoped it would.

The governor of Iran’s Central Bank, Valiollah Seif, disclosed the meeting, which took place in Paris, during an interview with CNBC. Seif said FATF representatives “were surprised by the steps taken by the Iranian banks and financial institutions,” and “that they were not aware of the changes we have made in our banking sector.”

Iran’s eagerness to get off the blacklist is likely related to the difficulty it faces accessing money that is owed to Iran but sitting in accounts overseas. Although Iran is now permitted to access those accounts, other sanctions related to the country’s links to terrorism make European banks unwilling to convert those accounts into U.S. dollars, which is standard practice for transferring money throughout the world.

Seif expressed confidence that Iranian banks would be removed from the blacklist, though he didn’t give a time frame.

FATF confirmed a recent meeting but declined to comment on its content or the tone. It would only say that “FATF manages a process to ensure that countries throughout the world comply with international anti-money laundering and counter-terrorist financing standards. This is a rigorous, apolitical, highly technical, and often lengthy process. The review of Iran will be treated in the same impartial manner that all countries subject to similar reviews have been treated.”

But a quick change in position from FATF is highly unlikely. In February, the institution issued the following statement: “FATF remains particularly and exceptionally concerned about Iran’s failure to address the risk of terrorist financing and the serious threat this poses to the integrity of the international financial system.”

It went on to urge nations to take counter measures against Iran to protect their own banking sectors from money laundering and and terrorism financing risks emanating from Iran. FATF warned that if Iran didn’t take further steps, it would urge countries to implement stronger counter measures at its next scheduled meeting in June.

Governor Seif described Iran’s inclusion on the list — the only other country on it is North Korea — as unfair, and “not compatible with the facts on the ground and the changes we have made.” He cited the implementation of an anti-money laundering bill passed three years ago, and a new “combating of terrorism” law passed by the Iranian parliament last month.