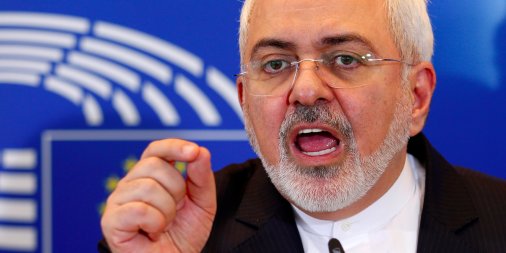 Mohammad Javad Zarif said the deal “is not an Iran-US agreement for the Republican front-runner or anybody else to renegotiate.”

After a lecture in Stockholm on Wednesday, Mohammad Javad Zarif said the deal “is not an Iran-U.S. agreement for the Republican front-runner or anybody else to renegotiate. It’s an international understanding annexed to a Security Council resolution.”

Trump has denounced the deal and said he’d seek to renegotiate it if elected president. Democratic front-runner Hillary Clinton has said she supports the agreement to rein in Iran’s nuclear program, which was endorsed by the U.N. Security Council.

It’s not possible “to renegotiate a text that is annexed” to such a resolution, Zarif said.

“It’s an arrogant statement and the sooner he stops making these nonsense statements the better off we all are in order to reach an agreement,” Zarif said. “We will leave Iraq whenever Iraq asks us to leave.”

Iran says its military advisers in Iraq are there at Baghdad’s request to help Iraqi forces fight Islamic State militants.

Al-Jubeir said Sunday that Iran must stop meddling in Iraq and that the presence of Iranian military units there is “unacceptable.”

Earlier Wednesday, scores of Iranians living in Sweden called for improvements in human rights and an end to executions in Iran as Zarif met with Swedish counterpart Margot Wallstrom in Stockholm.

Zarif told reporters every country can make improvements on human rights and said some people “have made a business” out of portraying Iran in a negative light.