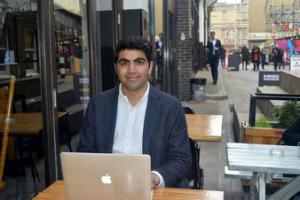 By Pamela Barbaglia LONDON (Reuters) – International firms are hunting for Western-educated Iranians to take on executive jobs in the Islamic Republic after the removal of most sanctions, but are finding it hard to win them over. Interviews with Western companies and headhunters as well as more than 20 Iranians living abroad showed that expatriates are waiting to see how promised reforms progress before deciding whether to go back, despite lucrative job offers.

Many in the diaspora are put off by the poor quality of life and problems such as red tape, a murky business culture, security issues, pollution and a lack of international schools for their children. They are also concerned about their rights and protections under the Islamic Republic’s judicial system.

Their reluctance is making life harder for conglomerates who need help to navigate Iran’s complex business world, train the local workforce and bridge a cultural and linguistic gap with affluent local consumers in the country of 80 million.

“This is the place where an expat who holds an MBA (Master of Business Administration) and has the right entrepreneurial attitude can make a real impact. Yet there’s never been a queue of expats applying for jobs here,” Giuseppe Carella, the Iran country chief of Swiss food group Nestlé, told Reuters.

To nurture future managers, Nestlé sends local graduates overseas for several years, honing their skills away from Iran until they’re ready to go back, Carella said.

Expats remain a tiny minority of the about 1,000 employees at the firm’s subsidiary in Iran, 15 years after its launch.

President Hassan Rouhani met Iranian expatriates in New York last September and urged them to re-engage with Iran, weeks after Tehran agreed to curb its nuclear program in exchange for the lifting of nuclear-related sanctions.

During a visit to Singapore this month, Foreign Minister Mohammad Javad Zarif said Iranian nationals living abroad were “the best bridges for dialogue of cultures and civilizations”.

The Iranian diaspora is estimated by Iranian officials at between 5 and 7 million people, mostly living in North America, Europe and the Gulf.

Some, like Paniz Golkar, a 26-year-old dual national of Iran and Canada, are tempted to return.

“I feel it’s my responsibility to go back. Iran needs professionals from all fields,” said Golkar, who is due to finish her studies at the Southern California Institute of Architecture in April. “It will be challenging to prove myself as a woman in business but there are more career opportunities in Iran than anywhere else.

“A lot of Iranians in California are talking ab

But there are many challenges to consider.

Some expatriates whose families left Iran before or soon after the 1979 revolution are skeptical about career prospects and worry that Tehran’s refusal to recognize their dual citizenship status makes them vulnerable to arbitrary arrest.

Others hesitate because of concerns over the bureaucratic regime, the lower standard of living in traffic-clogged Tehran and restrictions enforced by the “morality police” on Islamic dress and behavior codes.

British-Iranian Ali Tehrani, 24, tried to relocate to Iran last October but was worn down by the challenge of securing permits and licenses and an exemption from military service, which in Iran is compulsory and lasts 24 months.

“I quickly realized I didn’t have the skill sets to navigate the bureaucracy in Iran,” he said.

A graduate of University College London who founded a human resources tech firm, KeyPursuit.com, he had hoped to launch an Internet start-up in Iran focusing on online payments. He abandoned the project after three months.

moving back, it’s an option we can’t ignore,” she said.