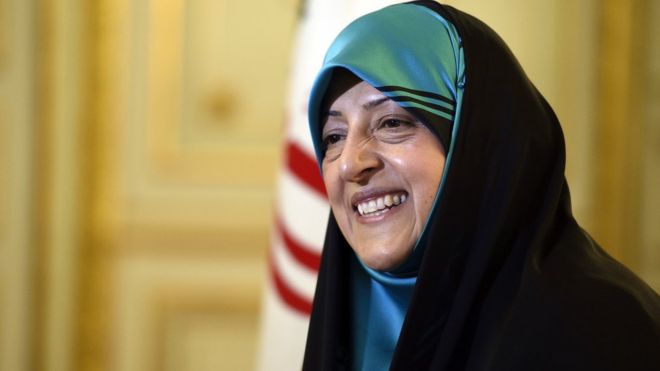 Three of Iran’s 12 VPs are women but the president has been criticised over his all-male cabinet.

There has been only one female cabinet member since Iran’s Islamic Revolution in 1979.

The cabinet, which must be approved by parliament, also lacks Sunni members. Sunnis are 10% of Shia-majority Iran.

Ms Mowlaverdi had said the all-male cabinet showed that Iran was “treading water”. Both she and Ms Ebtekar were vice-presidents in Mr Rouhani’s previous government.

Reformists believe the lack of diversity in the new cabinet is a sign that Mr Rouhani is bowing to pressure from Iran’s religious establishment.

Lawmakers are not expected to challenge the chosen cabinet, as key roles are filled with the approval of the Supreme Leader Ayatollah Ali Khamenei.

Mr Rouhani beat hardliner Ebrahim Raisi to the presidency in May after vowing to improve Iran’s civil liberties and rebuild ties with the West.

At a conference in February titled “Women, Moderation and Development”, he called for a greater female presence in politics and culture.

The only woman to hold a cabinet position in Iran since 1979 was former health minister Marzieh Dastjerdi, who served from 2009-13 under Mahmoud Ahmadinejad – Mr Roujhani’s hardline predecessor.