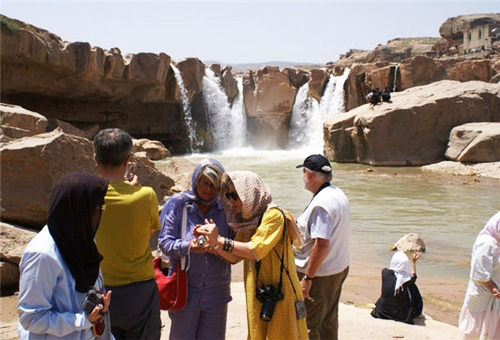 Iran’s share in the world tourism stands at 0.24 percent, not befitting the country at all, considering the opportunities that exist, said Mahmoud Eslamian, CEO of Iran’s Civil Pension Organization.He made the remarks addressing the International Travel and Hospitality Conference in Iran’s central city of Isfahan Feb. 20, Trend correspondent reported from the event venue.Eslamian further said that tourism and hospitality can be a great asset in creating jobs for seven million unemployed Iranians and diversifying incomes away from oil revenue.Isfahan Governor General Rasoul Zargarpour also addressed the conference, recalling that during President Hassan Rouhani’s trip to France last month, an agreement was signed for expansion of the Isfahan airport.He also said a high-speed railway line from Isfahan to Tehran will be built in less than 1.5 years.Local news agency Mehr earlier reported that Iran has 1,100 hotels – 130 of them have four and five stars.Iran plans to triple the number of hotels in the country before 2025.Experts believe that by 2025, the number of the tourists arriving in Iran will increase from five million to 20 million.