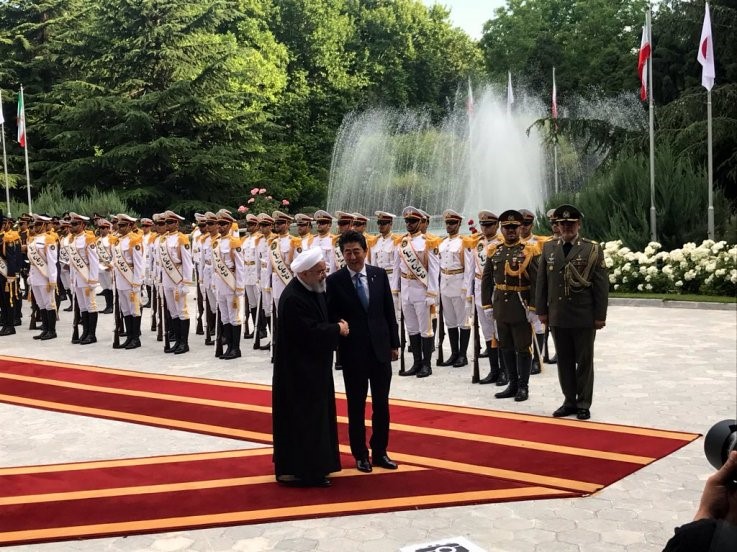 Last month marked nine decades since Iran and Japan established relations and while the 20th century saw both countries undergo dramatic political changes, they have maintained normal ties into the current era. Japan was a supporter of the 2015 nuclear deal struck by Iran and the U.S., alongside China, the European Union, France, Germany, Russia and the United Kingdom, and like these other signatories, Tokyo has continued to support it in spite of Trump’s pullout last year.

The unilateral U.S. exit and subsequent sanctions have pressured Japan into reducing its imports of Iranian oil, but Tokyo has sought to play a proactive role in potentially bringing Washington and Tehran together once again. As unrest grew in the Persian Gulf, Japanese Prime Minister Abe Shinzo made a historic visit to Iran in June in hopes of playing “as much a role as possible for peace and stability in the region.”

As Abe arrived in Tehran, Trump appeared to dismiss speculation that the Japanese leader was carrying a message to Iranian President Hassan Rouhani or supreme leader Ayatollah Ali Khamenei. The president tweeted: “While I very much appreciate P.M. Abe going to Iran to meet with Ayatollah Ali Khamenei, I personally feel that it is too soon to even think about making a deal. They are not ready, and neither are we!”

Abe was warmly received as the first Japanese leader to visit Iran since the 1979 Islamic Revolution that cast out a West-sponsored monarchy and ushered in a Shiite Muslim theocracy skeptical of foreign influence. As he made the case for diplomacy, however, his visit was overshadowed by the second series of attacks against oil tankers in the Gulf of Oman in the span of a month.

This time, among the ships targeted in the unclaimed acts of sabotage was a Panama-flagged, Japan-owned vessel carrying methanol from Saudi Arabia to Singapore. The U.S. swiftly blamed Iran’s elite Revolutionary Guards, claiming they used limpet mines against the ship. The vessel’s Japanese owner defied this narrative by arguing the crew saw flying objects ahead of the attack.

The Japanese government itself requested further evidence that Iran was behind the incident and, when Washington called for the formation of a multilateral maritime security initiative to patrol the Persian Gulf, Tokyo stood silent. Since then, only Australia, Bahrain, the U.K. and, most recently, the United Arab Emirates, have joined.

Japan’s military, known as the Self-Defense Forces, have traditionally steered away from combat operations as the Japanese constitution provides only an extremely limited role for the military and, even after a 2014 reinterpretation and a new 2015 National Defense Guidelines, there was little room for overseas operations. Such moves were particularly risky when dealing with a region known for rapid, unpredictable developments.

“The Middle East and the Balkan Peninsula are said to be the tinderboxes of the world,” former Japanese Defense Minister Nakatani Gen told Newsweek. “If Japan gets involved in this region, things could get very complicated, so Japan needs to be very careful in taking action.”

“I think the Japanese government is not going to be part of this initiative, but I personally think Japan should dispatch Self-Defense Forces so that Japan can protect its own ships,” he added.

Ohara Bonji, a senior fellow at the Sasakawa Peace Foundation, told Newsweek that “Japanese society will not accept conducting such military operations so easily in the Middle East, but it may use the framework of keeping peace in the international community.” He said “the Self-Defense Forces can operate outside the battlefield, such as operating in supply and replenishment, logistics and search and rescue” and suggested Japan may pursue independent mission by “sending ships outside the Strait of Hormuz.”

“They know the U.S. may not be happy about that operation, but they need to show some effort,” he added. “The U.S. will require Japan to play a more proactive role in security issues, but this could pose a problem for Japanese society.”

Doshisha University professor Murata Koji also told Newsweek that “Japan will not be directly involved in the maritime multilateral security cooperation, but may participate by sending the Self-Defense Forces by itself.” He explained this could be a way for Tokyo “to keep face with Tehran and with Moscow, too.”

Russia has expressed regular opposition toward U.S. moves deemed aggressive across the Middle East. While Moscow condemned the recent attacks in Saudi Arabia, it has also called for a thorough investigation before assigning blame and Foreign Minister Sergey Lavrov told reporters Thursday it was “important to make sure that the process is impartial because unsubstantiated accusations won’t help matters, they are only heightening already existing tensions in the region,” as cited by the state-run Tass Russian News Agency.

China, too, has criticized the attacks while at the same time dismissing any preemptive speculation as to who may have been behind them. Chinese Foreign Ministry spokesperson Geng Shuang told reporters that Beijing sought “a comprehensive, objective and impartial investigation into the incident.” She added: “China calls on relevant parties to refrain from taking actions that will escalate tensions in the region and to jointly uphold regional peace and stability.”

Moscow and Beijing have blamed an uptick in tensions across the Persian Gulf on Trump’s departure from the Iran deal. Japan has said little of that decision, but has sought to remain on positive terms with Russia and China as two regional powers that were increasingly cooperating on international affairs in the Asia-Pacific and beyond.

Though Washington has so far refrained from endorsing Tokyo’s efforts to play peacemaker in the Middle East, some experts saw a potential change with a notable departure last week within the Trump administration. The unceremonious removal of White House national security adviser John Bolton, a known war hawk with little appetite for deal-making, may present new opportunities for Japan.

This opinion was shared by one of of the men who once served as Bolton’s counterpart. Former Japanese Deputy Foreign Minister Tanaka Hitoshi, who now serves as chairman of the Japan Research Institute’s Institute for International Strategy, recalls how Bolton “was adamantly opposed to the Europeans negotiating with Iran” during deliberations years ago at the G8, for which Tanaka was the political director.

“At that time, Bolton was quite strong, he was negative toward negotiations,” Tanaka told Newsweek. “I support negotiations in this sense, Bolton’s removal may have a better impact on U.S. negotiations with Iran.”

Since Bolton’s departure, however, the Trump administration has retained its tough approach toward Tehran. French President Emmanuel Macron attempted to step up to the role of U.S.-Iran arbiter around the time of the G7 summit last month in Biarritz and, despite some brief signs of success, both sides fell back on their hard-line positions.

As a result, hopes have faded for a potential meeting between Trump and Rouhani at the sidelines of the upcoming United Nations General Assembly. As Khamenei doubled down on refusals to negotiate unless the U.S. lived up to its nuclear deal commitments, Rouhani has warned he may not even attend next week’s international gathering in New York as he has yet to be granted a visa.

Nonetheless, Abe has pledged to meet with Rouhani in hopes of rekindling Japan’s effort to defuse tensions in a region crucial not only to political stability worldwide, but global energy security as well.

“Japan has been trying to play a positive role in the Iran-U.S. standoff, a clear example of which was Abe’s visit to Tehran with the main aim of defusing the tensions,” Hamidreza Azizi, an assistant professor at Shahid Beheshti University in Tehran, told Newsweek. “I think for Japan, its own interests are at stake, especially because it’s a major oil importer from the Middle East and any dispute in the region would cause huge economic costs for Tokyo.”

At the same time, he struck a cautious note. “I don’t expect Abe’s initiatives to result in any concrete de-escalation, for two reasons: First, Iran sees the current scene as a confrontation primarily caused by the U.S. maximum pressure policy, so nothing would be solved unless Washington backs off from this specific line, something that’s not on the horizon right now. Second, Iran has concluded that those U.S. allies that are trying to mediate in the conflict do not have any independent leverage on the issue,” Azizi argued, noting Macron’s ill-fated initiative.

Pouya Alimagham, a historian at the Massachusetts Institute of Technology, also told Newsweek that “Japan can indeed play a constructive role in mediating between Iran and the U.S. It has longstanding ties with both Iran and the U.S. Iranians in general view Japan in a very favorable light,” alluding to Japan’s 1905 victory over czarist Russia, which had long intervened in Persian affairs.

Like Azizi, Alimagham explained that “there’s more than just friendly relations or history that drives relations” between the two.

“Japan imports Iranian oil and does extensive business with Iran, and U.S. sanctions are hurting those endeavors,” he told Newsweek. “Consequently, Japanese businesses have been pressuring their government to resume oil imports and to put in place protections in support of companies wanting to return to Iran.”

Still, there were major challenges ahead, even with an ambitious diplomatic effort on Japan’s part. Alimagham said that “the departure of Bolton helps make de-escalation more likely, but many barriers exist,” such as Pompeo, who readily blamed Iran for Saturday’s attacks and appeared enthusiastic to paint the Islamic Republic as a rogue actor, and regional U.S. partners such as Saudi Arabia, which was also building a case against Iran.

“That said, and despite the bluster, neither Trump nor the Iranians want a conflict to break out between the two countries, so there’s room for hope,” he added. “Japan, along with France and others, can use their ties with both countries to find common ground.”

Source: US Ally Japan Is not Joining Donald Trump’s Fight with Iran, So Can It Bring Peace?: News Week

Iran believes Iraq unrest is a plot to destroy bilateral ties
France’s foreign minister warned: Iran and United States have one month to reach an agreement