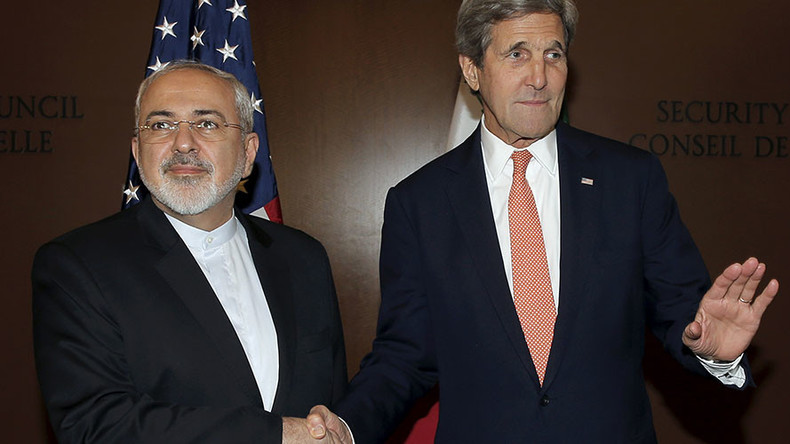 The US will not stand in the way of foreign deals with Iran that are in line with the landmark nuclear deal, US Secretary of State John Kerry.

The US will not stand in the way of foreign deals with Iran that are in line with the landmark nuclear deal, US Secretary of State John Kerry said to clear up some “confusion” before his meeting with Iranian Foreign Minister Mohammad Javad Zarif.

Kerry and Zarif met for the second time this week on Friday at UN headquarters in New York.

“The United States is not standing in the way and will not stand in the way of business that is permitted with Iran since the [nuclear deal] took effect,” Kerry read from prepared text.

“We’ve lifted our nuclear-related sanctions as we committed to do and there are now opportunities for foreign banks to do business with Iran. Unfortunately, there seems to be some confusion among foreign banks and we want to try to clarify that as much as we can.”

Kerry addressed the issue after Iran complained that US financial regulations are still blocking promised sanction relief for Iran.

The Secretary of State also stressed that the US is willing to clarify what kind of business deals are now permitted, while encouraging foreign banks to ask US officials if they aren’t sure.

Foreign institutions should not think that what was prohibited in the past is still illegal. Nor should they assume that transactions that are illegal for the US are also illegal for them.

Prior to Kerry’s statement, Iran and foreign institutions had been left uncertain as to how to proceed with deals under the new sanctions relief regime.

Some of the most confusing areas remain whether foreign firms can provide funds to Iran and whether Iran is able to access previously frozen money. Kerry explained that all of the above are permitted.

Iran has been pushing the US to help it integrate into the global financial system. Last week, Iranian officials used a visit from EU’s foreign policy chief, Federica Mogherini, to put pressure on the US.

“Iran and the EU will put pressure on the United States to facilitate the cooperation of non-American banks with Iran,” Iran’s Foreign Minister, Mohammad Javad Zarif, said at a Tehran press conference with his EU counterpart.

“It’s essential that the other side, especially the United States, fulfill its commitments not on paper but in practice and removes the obstacles especially in banking sector.”

According to the terms of the agreement signed last July, US banks are still not allowed to deal with Iranian institutions directly, but financial institutions from other parts of the world have fewer limitations. Nevertheless, they remain wary of inadvertently contravening American restrictions, and have been slow to provide financing for Tehran.

Iran’s key economic sectors had been under US imposed sanctions for conducting a series of nuclear tests from 1995 up until the terms of the new nuclear deal were fulfilled by Tehran.