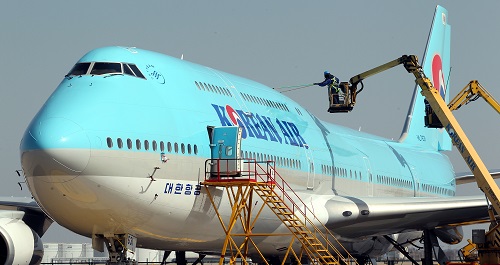 The Ministry of Land, Infrastructure and Transport held a meeting of an aviation transport deliberation committee on Friday to give the airline the traffic right of direct routes from Korea to Iran. The Korean airline could fly airplanes over Iran, beating Asiana Airlines Inc. that has been competing with the airline over the route of Iran that saw its economic sanctions lifted early this year. Korean Air Lines is expected to start to service cargo planes as early as the second half of this year. Passenger planes have not been decided yet. However, the government is pushing ahead with a plan to increase the traffic right to the Middle Eastern country from four times per week to seven times in order to check monopoly of Korean Air Lines and maintain competitive composition.

The aviation industry predicts that the expansion of the traffic right would make the airline’s competitor Asiana Airlines get the right to service airplanes from Korea to Iran three times per week.

The airline has moved to attract corporate customers as it expects the lifting of the economic sanctions would increase high-profit cargos such as information technology components and medicine and medical supplies. “We are preparing to begin the service of airlines as early as possible, starting with cargo planes,” said an official of the airline. The company is considering starting to service passenger planes. The direct flights from Incheon to Teheran would reduce flight hour by six to 10 hours. Currently, it takes about 16 to 20 hours from Incheon via Egypt or Dubai to Teheran. It would take around 10 hours for the direct flights.

The aviation industry views Iran as an emerging and promising market. About 25,000 Korans go to Teheran via Middle Eastern cities each year. The industry analyzed that the launch of direct flights of the nation’s airline would increase passengers by 2.5 times, or 65,000, per year.