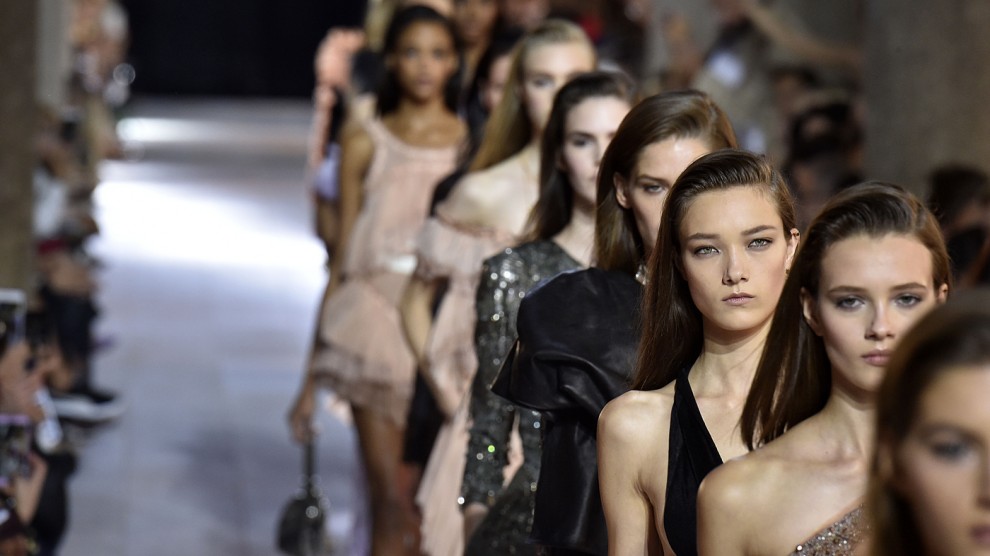 Luxury Italian fashion house Roberto Cavalli has opened a new store in Iran’s capital, Tehran.This makes it one of the first luxury brands to formally enter the Iranian market since Iran curbed its nuclear program enough to trigger sanctions relief last month. The lifting of sanctions was a major part of the Iranian nuclear deal.Now, many European and U.S. companies are cautiously eyeing the Iranian market, despite uncertainty about what sort of business dealings will be allowed in the absence of many sanctions. Europe is opening up trade and business with Iran far more than the U.S has done.As NPR’s Steve Inskeep reported from Tehran earlier this month, “scores of foreign business groups have come to Iran, but few are putting down money.” This, despite clear business opportunities: “Iran has a young and growing population of more than 75 million. It’s the highly educated populace of an oil-rich republic.”But Roberto Cavalli’s entry into the Iranian market might be an early sign of a possible “luxury-shopping revolution,” as the BBC termed it.”The Iranian market is going through a new exciting period, and luxury brands such as Cavalli are looking at the country and its 80 millions of potential consumers with great attention,” Roberto Cavalli CEO Renato Semerari says in a Women’s Wear Daily article that was tweeted by his company. Here’s more from Semerari:”We think that Iran is set to become a very interesting market for luxury products, and we are happy to be among the first to open a monobrand in Tehran. … For us it is a great chance to export also to this country Cavalli’s high-quality fashion, recognized and appreciated all over the world.”Vogue described the Cavalli Spring 2016 Ready-to-Wear collection as “street and nightclub-wear with an 80s spin,” including “skimpy body-con dresses, high-waisted animal-print jeans and leggings, sleeveless biker jackets, bandeau tops tied in pouf-y bows on one shoulder, and prom skirts trailing giant frilled trains in their wake.”No word whether all these styles will be featured in the Tehran store, which is located in the posh Tehran neighborhood of Zafaraniye. According to Women’s Wear Daily, the two-floor boutique “features lavish, light-reflecting floors made of large slabs of dark brown quartzite mixed with crystal dust. Dark brown pony hair carpets pepper the floors.”Iranian shoppers haven’t been completely cut off from designer fashions despite decades of sanctions. Tehran is home to luxury malls featuring major Western brands. But as the BBC reports:”Although these luxury shopping centres look exactly the same as retail outlets anywhere in the world, the designer goods on display have actually been brought in by third-party importers via Turkey and the Gulf States.”The outlets that sell them have no connection to the big brand manufacturers.”Most Western clothing brands have been deterred by international banking sanctions that made it difficult to get their profits out of Iran, the BBC reports.Meanwhile, it adds, “Iranians have developed a taste for high-end designer goods.”The poster children for the well-heeled, young Iranians that brands such as Roberto Cavalli are hoping to reach might well be those in “The Rich Kids of Tehran.” It’s an Instagram account featuring ultra-wealthy Iranian teens wearing designer clothing and living opulently.

photographer documents the architectural details of ceilings in iran
Comment