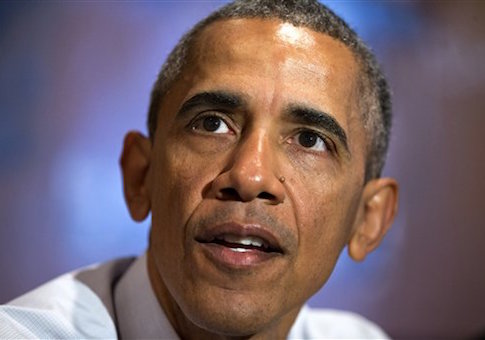 “President Obama asked to meet with Iranian President Hassan Rouhani in two secret letters sent in late March to both Iranian Supreme Leader Ali Khamenei and President Rouhani,” according to the Middle East Media Research Institute, or MEMRI, which translated a Farsi-language report published Tuesday by a website affiliated with Iran’s Green movement.

Obama purportedly wrote in the correspondence “that Iran has a limited-time opportunity to cooperate with the U.S. in order to resolve the problems in Syria, Iraq, and Yemen, and promised that if Iran agreed to a meeting between him and Rouhani, he would be willing to participate in any conference to this end,” according to MEMRI’s translation of the report.

The reports could not be independently verified. A State Department spokesperson referred theWashington Free Beacon to the White House for comment on the report. The White House declined to comment on record.

Iranian leaders are said to be open to Obama’s request.

The Iranian report “further stressed that Supreme Leader Khamenei discussed the request with President Rouhani, that Rouhani said that Iran should accept the request and meet with Obama, and that such a meeting could lead to an end to the crises in the region while increasing Iran’s influence in their resolution,” MEMRI wrote. “Rouhani promised Khamenei that any move would be coordinated with him and reported to him. According to the report, Khamenei agreed with Rouhani.”

Senior U.S. officials have met with top Iranian officials in recent days in a move perceived by some as laying the groundwork for a future powwow between Obama and Rouhani.

Amir Toumaj, an Iran expert and research analyst at the Foundation for Defense of Democracies, expressed doubt that the Iranian Supreme Leader would concede to such a meeting, as it may empower more moderate elements of the Iranian regime.

“It seems highly unlikely that Khamenei would give his assent. There is a significant political cost for him, and he doesn’t have the appetite,” Toumaj told the Free Beacon. “The [nuclear agreement] is still fresh. There may be just a little over a year left until the 2017 Iranian presidential elections, but there is too much at stake.”

“Khamenei and the radicals have markedly escalated their attacks on Rouhani on the merits and benefits of the JCPOA,” or Joint Compressive Plan of Agreement, he added. “A meeting with President Obama would give Rouhani political capital and reopen the debate on rapprochement.”

An Obama-Rouhani face-to-face could reignite debates in Iran about rapprochement with the United States.

“An Iranian president shaking hands with the ‘Great Satan’ would not be a minor event,” Toumaj said. “Just today, Khamenei delivered remarks on how the U.S. wants to keep Iran ‘backwards’ and is waging a ‘soft war’ to spread Western cultural values among the youth and undermine the revolution from the inside. This regime cannot survive in its current shape without anti-Americanism.”

“It seems highly unlikely that Khamenei would give his assent, though some kind of communications channel to discuss the issue would not be entirely outside the realm of possibility, especially if it would serve Tehran’s interest,” Toumaj said. “There is, however, political cost for Khamenei especially for the direct face-to-face talk included in this report, and he doesn’t have the appetite.”