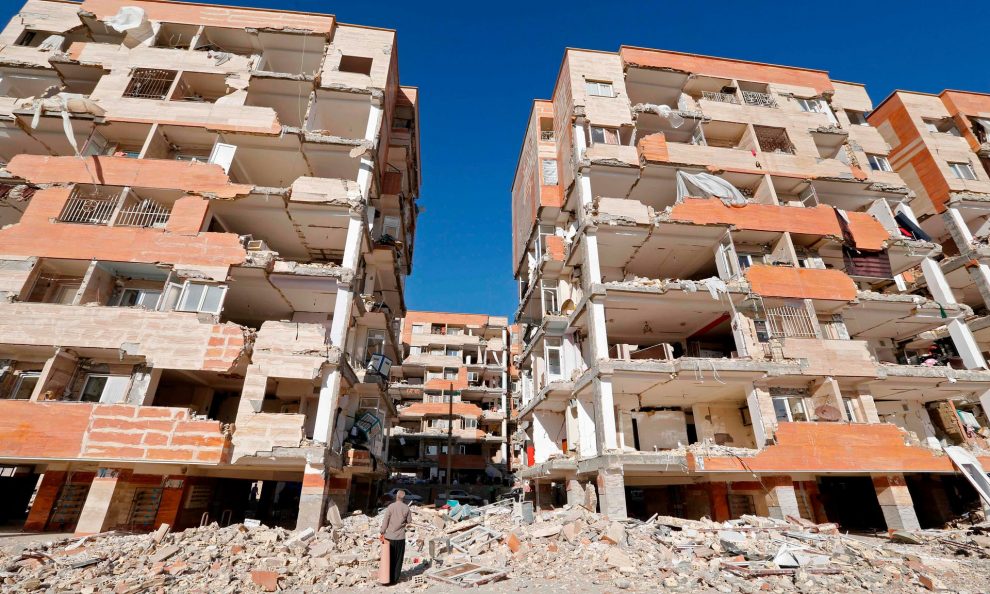 Iranian officials have raised the death toll from Sunday’s earthquake of 7.3 magnitude on its border with Iraq to at least 530, making it the deadliest in the world this year.

The country’s president, Hassan Rouhani, travelled on Tuesday to Kermanshah, the area hardest hit by the earthquake, which was felt hundreds of miles away in both Tehran and Baghdad.

Officials in Iran declared Tuesday as a national day of mourning and newspapers broke with tradition to publish their front page headlines in the Kurdish language, in a rare move showing solidarity with the majority-Kurdish areas worst affected.

“Iran wept”, read the front page of Aftab-e-Yazd, over a big photo of an Iranian woman holding a lost family member in her arms. “Kermanshah, you are not alone,” read the reformist Etemaad’s headline.

Mohammad-Ali Monshizadeh, an official from Kermanshah province, told the Irna state news agency: “Up to now, we have issued 430 death certificates … but an estimated number of 100 to 150 more people have been buried in quake-stricken villages and towns without permission … which raises the overall death toll to between 530 to 580 in Kermanshah.”

At least 7,460 people were injured during the earthquake, which hit seven big cities and 1,950 villages in the province. Officials said 12,000 houses had been completely destroyed and a further 15,000 damaged, Irna reported.

Iran struggled to shelter all those affected on Monday night as thousands were forced to sleep in the open air without electricity or water supplies. “We are living in a tent and we don’t have enough food or water,” Ali Gulani, 42, from Qasr-e-Shirin, told BBC’s Persian service. “You can hear children crying; it’s too cold. They are holding on to their parents to warm themselves – it’s pretty bad.”

More than 316 people were killed in the town of Sarpol-e Zahab alone, about 10 miles from the Iraqi border. At least 28 people were also reported to have been killed in Qasr-e-Shirin, another city in Kermanshah that serves as a gateway for trade between Iran and Iraq.

A resident, Khosrow, told BBC Persian: “Walls have fallen on my sisters and father. I had to drag them out of the house. My mother is injured. My aunt, cousin and my cousin’s children died. The whole village is ruined. Graves are cracked and some of the bodies have come out of the ground.”

The quake was centred 19 miles (30.6km) outside the eastern Iraqi city of Halabja, according to the most recent measurements from the US Geological Survey. There were also casualties on the Iraqi side but the number of those killed in Kermanshah was significantly higher.

Rouhani, promising victims emergency financial assistance, said in Kermanshah: “I want to assure those who are suffering that the government has begun to act with all means at its disposal and is scrambling to resolve this problem as quickly as possible.”

Serious questions have been raised about the construction standards of a series of newly built apartments that collapsed or were severely damaged. Iran’s first vice-president, Eshaq Jahangiri, said many had been built as part of an affordable housing scheme introduced by the former president Mahmoud Ahmadinejad.

The Iranian daily newspaper Hamdeli blamed Ahmadinejad for the scale of destruction, publishing a cartoon on its front page under the headline “This is what you cooked [for us]” of the former president taking a selfie in the rubble.

The US put differences aside on Monday to express condolences with the people of Iran and also Iraq, in comments that were also widely reported across the Iranian media. “We keep the families of those who were killed, and injured, in our thoughts as well as the communities that have suffered damage to homes and property,” said Heather Nauert, the US state department spokeswoman.

Iran has seen powerful earthquakes in recent decades. The 1990 Manjil–Rudbar earthquake in northern Iran, which had a magnitude similar to the one on Sunday, resulted in the deaths of 35,000 to 50,000 people. The 2003 Bam earthquake in the southern Kerman province killed at least 31,000. Sunday’s earthquake was the deadliest in Iran for more than a decade.