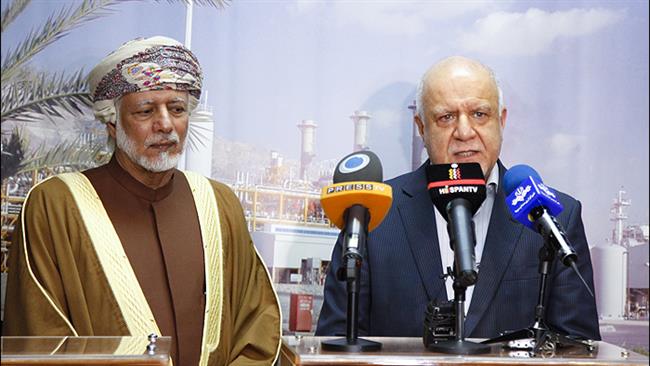 Oman says studies on an undersea gas pipeline to carry Iranian gas to the Persian Gulf sultanate will conclude in the next six months.

Oman’s Foreign Minister Yusuf bin Alawi discussed the plan with Iranian Minister of Petroleum Bijan Zangeneh in Tehran on Sunday, describing it as the most important shared project between the two countries.

The $60 billion deal was concluded during President Hassan Rouhani’s visit to Muscat in 2013 to ship 20 million cubic meters per day of Iranian gas to Oman for a period of 25 years, the IRNA news agency said.

“Expert and commercial studies of the pipeline for exports of Iranian gas to Oman are being carried out and will conclude in the next six months,” IRNA quoted bin Alawi as saying after talks with Zangeneh.

“Given favorable relations of the two countries, Oman is interested in Iranian gas and okay with all the details of the plan,” he added.

The two countries signed another deal in 2007 to build an LNG plant in Oman to process the Iranian gas.

“Based on the agreement, Iranian gas will be exported to global markets via Oman,” bin Alawi said.

“Iran’s plan is to reach an agreement with Oman on the LNG tooling fee,” he said, adding Oman had a spare production capacity for 2.5-3.5 million tonnes of LNG which Iran can use.

“If the tooling fee for LNG conversion is rational, the gas price can be set on that basis,” he said. Kameli said Iran had presented its proposals to the Omanis and was waiting for an answer. The Omani minister said the topic of his talks with Zangeneh were reviewing their plans in the oil, gas and petrochemical sectors and prospects of their economic, trade and oil cooperation and expanding it.