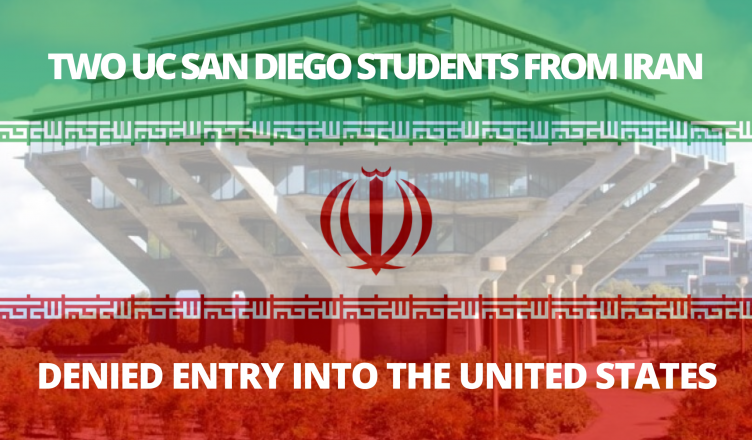 Two Iranian graduate students set to attend UC San Diego were denied entry into the United States last month after their F student visas were invalidated by the United States State Department. According to The Guardian, a total cohort of twenty students were prevented from boarding their flights to the United States from airports in Iran, Turkey, and Qatar. The students said that the revocations were given without any warning or explanation.

The students were set to attend graduate programs, most of which were schools in the UC system. Peyman, one of the students slated to begin his graduate degree in electrical engineering at UCSD, told the New York Times  that he felt “damaged emotionally, financially, academically.” He did not share his surname due to his fear that talking to the press would affect re-approval of his visa.

The State Department said that policies regarding student visas had not changed. High-ranking education officials also noted that it was common for student visa issues to arise every fall for international students.

The State Department’s multi-year report notes that a total of 399,262 people were issued F or M student visas last year. The department does not report statistics on visa denials.

Back in March, 2017, President Trump signed Executive Order 13780 which banned entry into the U.S. of foreign nationals from eight countries, including Iran and North Korea. Those coming on valid F and M student visas, or J exchange visitor visas are exempt from the travel ban. The order also notes that “[individuals who are planning to come to the U.S. under these visas] should be subject to enhanced screening and vetting requirements.”

The cancellations occurred before the Sept. 14th drone strike on Saudi Arabian oil installations by the Yemeni Houthi movement, which is supported by the Iranian government. Tensions between the United States and Iran have remained high in recent years.

In a letter to the San Diego Union-Tribune, the University of California Office of the President issued a statement that expressed its concerns about the Iranian students not being allowed entry.

“We are doing everything we can for these students, including working with the U.S. State Department, U.S Customs and Border Protection and Capitol Hill to seek answers. UC has a deep commitment to providing a world-class education to all of our international students,” the statement reads. “Once they are enrolled at UC, we do everything possible to assist with their safe and timely arrival on campus, as well as to support them throughout their studies at the university.”

UCSD reported in its 2018-2019 student profile that 18.6% of its student body are international students.

The two graduate students have still not been allowed entry into the United States. UCSD students who have questions or concerns about their visas are encouraged to speak to the International Faculty and Scholars office.