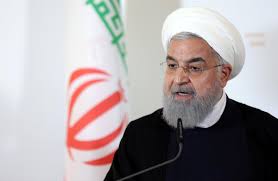 TEHRAN, Oct. 24 (Xinhua) — The United States has failed to harm Iran’s global standing and isolate the Islamic republic, Iranian President Hassan Rouhani was quoted as saying by the Press TV on Thursday.

Iran’s position in the world has improved, despite the U.S. attempts to isolate it, said Rouhani ahead of his trip to Azerbaijan for the 18th summit of the Non-Aligned Movement (NAM).

Iran is an influential country in the region and the economic pressures by the United States have failed to bring the Iranians to their knees, he said.

Rouhani criticized Washington for its “unilateral approaches toward other countries and interfering in their domestic affairs.”

During his visit to Baku, capital of Azerbaijan, the Iranian president will address the NAM summit on Iran’s stance on important regional and international issues.

On the sidelines of the two-day meeting, slated for Oct. 25-26, Rouhani will hold bilateral meetings with other heads of the NAM states. Azerbaijan will formally take over the chairmanship of NAM for the next three years at the Baku summit.