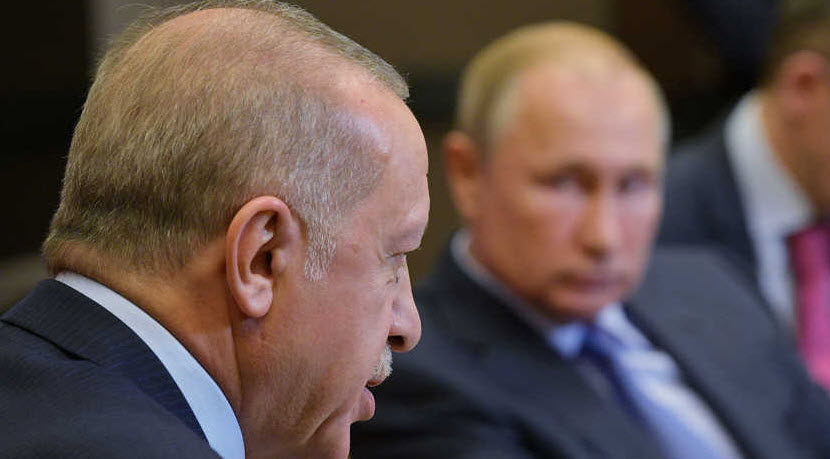 Two weeks after the Oct. 9 start of Turkey’s Operation Peace Spring in northeastern Syria, Russian President Vladimir Putin and Turkish President Recep Tayyip Erdogan met in Sochi to discuss ways to resolve mutual concerns about the situation in Syria and how to stabilize it. At the end of their meeting on Oct. 22, the two leaders announced a deal to halt the further advance of Turkish troops on Syrian territory in exchange for Moscow’s commitment to help expel Kurdish armed groups from areas adjacent to Turkey’s border. Iran, which had criticized the Turkish offensive, was quick to react to the deal between its two Astana process partners.

On Oct. 23, Iranian Foreign Ministry spokesman Abbas Mousavi said that Tehran welcomed the deal, calling it a “positive step in restoring stability and peace in the region.” He added, “We hope that this agreement will help address Turkey’s security concerns on the one hand and maintain Syria’s territorial integrity and strengthen its sovereignty on the other.” Mousavi also touched on the 1998 Adana Agreement — the pact between Ankara and Damascus on cooperating to secure their shared border and to combat terrorism — calling it a good basis for addressing the concerns of both Turkey and Syria.

From the Iranians’ perspective, support for the Adana Agreement might be the main positive element of the Putin-Erdogan deal. Article 4 states, “Both sides reaffirm the importance of the Adana Agreement.” Iran, as a major ally of Syrian President Bashar al-Assad, has long called for implementation of the Adana Agreement, which it views as the only viable and sustainable way of stabilizing the situation along the Syrian-Turkish border. Resuscitating the agreement, abandoned amid the Syrian civil war, would also represent Ankara’s de facto recognition of the Syrian government’s legitimacy, an important factor for Damascus allies Iran and Russia in preserving Assad’s rule.

This is not the only positive aspect of the Sochi deal for Iran. At the start of Operation Peace Spring, Tehran was concerned that Turkish forces’ advancement deep into Syria would dramatically change the facts of the ground, resulting in the possibility of long-term Turkish control over the territories east of the Euphrates River. Farther west, Turkey had already seized control of Afrin, in early 2018. A Turkish occupation would naturally complicate the Assad government’s plans to reassert control over all of Syria. Not only does the new deal freeze the situation in the northeast, preventing the expansion of Turkey’s military presence in that region, it also recognizes Assad’s recently restored control over the Kurdish-held cities of Qamishli, Kobani and Manbij. Further, the deal establishes the role of Syrian border guards in maintaining security on the Syrian side of the Turkish-Syrian border. All this represents an easy win for Assad, which Iran definitely welcomed.

The other benefit to Iran from the new deal relates to the apparent end of the formerly US-backed Kurds’ desire to establish independent rule in eastern Syria. Iran has always been against the idea of an autonomous Kurdish region in Syria. It maintained this position despite expressing concern about Turkey’s recent military operation and while trying to push the Syrian Kurds toward a compromise with Damascus. From Tehran’s perspective, the establishment of an autonomous Kurdish area would represent the prelude to Syria’s partition, an outcome Tehran believes the United States and Israel support in order to weaken the pro-Iran axis in the region. The Kurdish armed groups’ effective loss of Washington’s direct military backing and their withdrawal from a number of key strongholds appear to signal the death of Rojava.

All this does not, however, mean that the new status quo emerging from the Russian-Turkish deal is completely in Iran’s favor. Indeed, that Tehran was absent from the discussion between Moscow and Ankara on northeastern Syria is telling of Iran’s lack of sufficient leverage to play a decisive role in the matter.

Iran and Russia had been on the same page in regard to preserving Syria’s sovereignty and territorial integrity as well as in crafting a compromise between Assad and the Kurds on the one hand and between Damascus and Ankara on the other. Russia appears, however, to now be the leading dealmaker in Syria. On Oct. 22, Riad Darar, co-chair of the Syrian Democratic Council, the political wing of the Syrian Democratic Forces (SDF), expressed the hope that “Russian mediation would lead to agreements that would provide [the opposition] with the opportunity for political participation through fair elections.” Meanwhile, SDF Commander in Chief Mazlum Kobane was at Qamishli airport negotiating with a Russian military delegation on the terms of a deal with Damascus.

Iran’s role and interests were not independently mentioned or discussed in Russia’s interactions with the Kurds or in the deal with Turkey. To the contrary, although both Tehran and Moscow had criticized Turkey’s military incursion, Erdogan expressed dissatisfaction over Iran’s position on the issue, but remained silent about Russia’s position. “While Iran was expected to support Operation Peace Spring, it has taken an opposing stance,” Erdogan said before departing for Sochi. As such, it seems that Iran is gradually being sidelined by its two Astana partners, at least when it comes to northeastern Syria.

Iran is also concerned about the possible long-term implications of the recent deal on the social and demographic composition of the northeast. Although Tehran officially supports the return of Syrian refugees as an important step in Syria’s transition toward the postwar period, it shares Assad’s concern that Ankara might use the current opportunity to settle radical Sunni or pro-Turkish elements in the areas under its control. During an Oct. 23 call with Putin, Assad expressed his opposition to the “attempts to change [Syria’s] demographic structure by any title and under any pretext.” Indeed, such a move could enhance Turkey’s leverage over the future of Syria to the detriment of Iran as well as Assad.

Iran is nonetheless expected to maintain close contact with Russia while trying to preserve the role of the Astana format as the only viable political framework for Syria. This will assist Tehran in trying to ensure that its basic interests in Syria are not compromised as a result of the unilateral or bilateral moves of its two partners.