Home » The supreme leader of Iran, Ali Khamenei believes that the US is behind the public chaos in Iraq and Lebanon 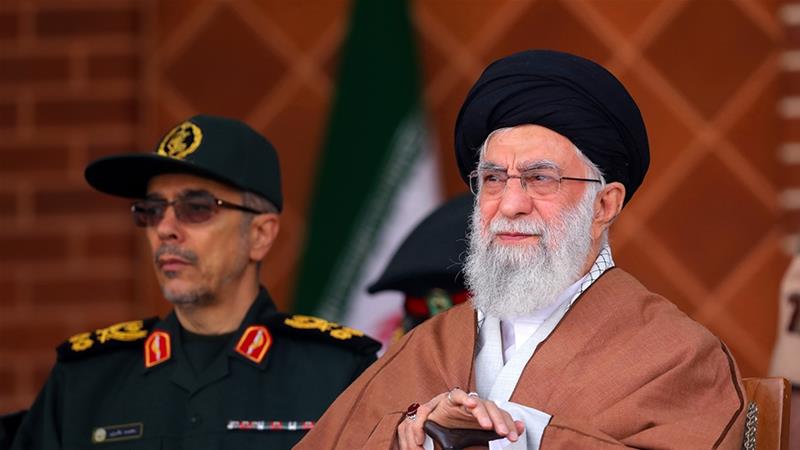 Iran‘s Supreme Leader Ayatollah Ali Khamenei has blamed the United States and its allies for spreading “insecurity and turmoil” in Iraq and Lebanon, urging anti-government protesters in both countries to seek changes in a lawful way.

“Their people also have to know that although they have legitimate demands, those demands can be met only through the framework of legal structures,” he said on Wednesday in rare remarks addressing the wave of demonstrations that erupted in Iraq and Lebanon this month.

“Their people also have to know that although they have legitimate demands, those demands can be met only through the framework of legal structures,” he said on Wednesday in rare remarks addressing the wave of demonstrations that erupted in Iraq and Lebanon this month.

Speaking at a graduation ceremony at Iran’s Khatam al-Anbia Air Defence Academy, Khamenei accused “America and Western intelligence services” of inflicting damage and of creating “chaos” in the region.

“They are destroying security. This is the worst kind of hostility and the most dangerous and spiteful behaviour against a country,” he said.

Khamenei’s speech came as the US called for the formation of a new Lebanese government that would be responsive to the needs of the country’s population.

“The Lebanese people want an efficient and effective government, economic reform, and an end to endemic corruption,” Pompeo said in a statement after the resignation on Tuesday of embattled Prime Minister Saad Hariri in the face of nearly two weeks of mass protests demanding the departure of the country’s entire political elite.

Al Jazeera’s Zeina Khodr, reporting from the capital, Beirut, said that with both Washington and Tehran weighing in on Lebanon’s political crisis, the country was “yet again caught in the arena of the US-Iranian struggle”.

The nationwide protests in Lebanon erupted amid growing anger over official corruption, poor public services and years of economic mismanagement.

Iran is a major backer of Lebanon’s Shia Hezbollah group, which has so far resisted calls to change the status quo. The group and its allies are part of a coalition government that came to power last year after months of negotiations.

While some supporters of Hezbollah and the allied Amal Movement have attacked anti-government demonstrators in central Beirut, the protests have largely been peaceful and united people from a wide range of backgrounds.

Lebanese protesters have rarely called out Iran and Hezbollah, but a common chant, “All means all,” implies that none of Lebanon’s factions, including Hezbollah and its allies, are beyond reproach.

In Iraq, tens of thousands of people have taken to the streets this week in a second wave of protests against a government and political elite they say is corrupt and out of touch.

The mass demonstrations have been met with a combative response from security forces, who have used tear gas, rubber bullets and live ammunition against those taking to the streets. More than 200 protesters have been killed since the unrest began on October 1.

Many protests say the country’s vast oil wealth has not adequately trickled down to its citizens, with millions lacking access to adequate healthcare, education, clean water and electricity.

In recent months, rising tensions between Baghdad’s two main allies, the United States and Iran, have raised fears among many Iraqis of their country being caught in the middle of the escalating struggle between Washington and Tehran for regional influence.

Both the US and Iran enjoy significant political and military influence in Iraq, and protesters this month have accused the political elite of being subservient to one or the other without concern for the needs of ordinary people.

Zarif: the US attempts for excluding Iran from the region is not going to work
Signature of Tech Agreement between Venezuela and Iran