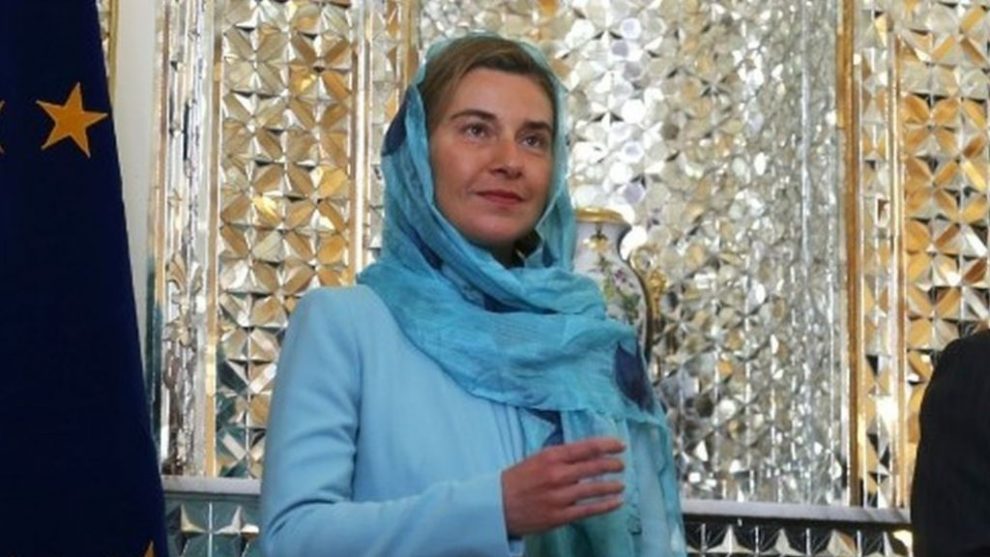 European Union foreign policy chief Federica Mogherini is in Iran for the highest-level talks between the EU and Iran in more than a decade.

Federica Mogherini is leading a delegation of seven EU commissioners for the discussions, which follow on from last year’s historic nuclear deal with the Islamic Republic.

Her visit also marks the start of a new phase in relations.

Trade, energy and the environment are areas both sides are keen to explore.

The BBC’s Chief International Correspondent Lyse Doucet, who is travelling with the EU delegation, says that the signing of the nuclear deal paved the way for the lifting of financial sanctions against Iran.

At the same time Iranian President Hassan Rouhani has held talks with Turkey‘s President Recep Tayyip Erdogan in the presidential palace in Ankara.

They are reported to have discussed the Syrian conflict and strengthening trade links which they hope will rise to $30bn within two years.

Western sanctions linked to human rights and terrorism are still in place in Iran.

Ms Mogherini – on a one-day visit to Iran – told a news conference that the EU’s policy on human rights worked on the principle of pursuing engagement and dialogue with Iran.

Mr Zarif called on the Americans to fulfil their commitments in relation to the nuclear deal and remove obstacles to the banking sector.

Ms Mogherini is discussing the EU’s remaining sanctions with the Iranian leadership as well as what is said to be one of her major concerns – bringing an end to Syria’s punishing war which would also help resolve Europe’s migration crisis.

Engaging directly with Iran – a key player in Syria – is for Europe one of the main benefits of the nuclear deal.

Iranian officials say they also want to strengthen this relationship – especially because the kind of dialogue taking place in Tehran on Saturday is still too politically sensitive for Iran to have with the United States, our correspondent says.

Six world powers led by the US agreed in July last year to lift sanctions that had locked down much of the Iran’s economy for years in exchange for limits on Tehran’s nuclear programme.

The move allowed Iran to resume a higher level of oil exports when the deal was implemented in January, as well as opening up more trade opportunities.