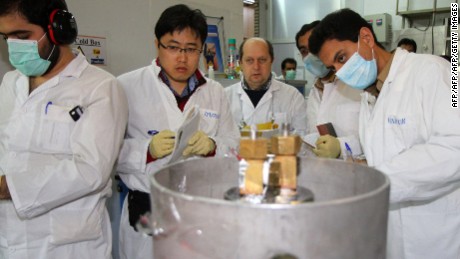 The U.S. will purchase from Iran 32 metric tons of heavy water, a key component of nuclear reactors, according to a senior administration official.

The U.S. will purchase from Iran 32 metric tons of heavy water, a key component of nuclear reactors, according to a senior administration official.

The official told CNN the goal of the transaction is to get the heavy water out of Iran in the same way the Iran nuclear deal compelled Iran to ship its supply of enriched uranium to Russia.
Reducing its stockpile of nuclear materials like enriched uranium and heavy water is a key component of the Iran nuclear deal.
“The importance of heavy water to a nuclear proliferator is that it provides one more route to produce plutonium for use in (nuclear) weapons,” the Federation of American Scientists said.
The U.S. will spend $8.6 million for the heavy water, with the U.S. official saying the arrangement will likely be revenue-neutral since the Department of Energy will resell the heavy water to commercial and lab facilities in the U.S., including the Oak Ridge National Lab.
The official said the U.S. can’t make heavy water domestically and, as a result, the U.S. lacks an inventory to use for science and research.
The transaction was first reported by the Wall Street Journal.
Republican Speaker of the House Paul Ryan released a statement lambasting the planned purchase, saying, “For Tehran, the nuclear agreement is the gift that keeps on giving.”
Ryan added that the deal would “directly subsidize Iran’s nuclear program,” calling it “yet another unprecedented concession to the world’s leading state-sponsor of terrorism.”
House Foreign Affairs Committee Chairman Ed Royce also slammed the announced deal.
Royce, a California Republican, said in a statement, “The Obama administration is handing Iran’s radical regime more cash” and that transaction “encourages Iran to produce more heavy water to sell — with a stamp of U.S. approval — on the international market.”
The U.S. continues to maintain some financial restrictions on Iran that prohibit imports and ban the use of U.S. dollars in trade with Iran.
But the administration official said the new arrangement complied with all elements of the Joint Comprehensive Plan of Action, the administration’s official term for the Iran nuclear deal.
“Treasury has the authority to authorize U.S. government activities related to implementation of the JCPOA. This is one of those activities.”
While the official said current sanctions law prohibited Iranian imports, he added the same law allowed President Barack Obama “to create regulatory exceptions to those prohibitions.”