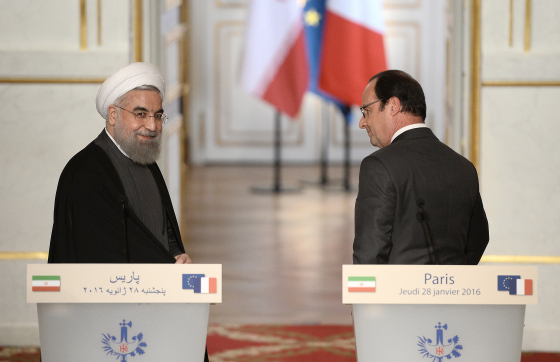 Just three months ago, Iran’s President Hassan Rouhani flew to Rome and Paris on a frenzied shopping spree, signing nearly 50 billion euros worth of deals within a few days, for dozens of new aircraft, upgraded rail lines, overhauled airport terminals, and much else. It was just a week after most Western sanctions against Iran had ended—the result of the nuclear deal inked last year with the United States, European Union, and the United Nations—and Iranian officials were ecstatic at the prospect of filling huge needs that had developed under years of sanctions, and kickstarting their hard-hit economy. “We don’t see any obstacles for companies who would want to come and invest in Iran,” Rouhani told French executives in Paris at the time, after shepherding through dozens of agreements with global companies. “My coming here is to show that Iran is ready for investments.”

Iran is still more than ready for those investments. Yet nearly three months later, companies wanting to invest in Iran say they face obstacles aplenty. What is more, they warn that the complications involved in doing business there could slow their investment deals to the point that Iran’s reform program could ultimately be at risk. “Nothing is moving,” says Adarvan Amir-Aslani, a Paris lawyer who has recently negotiated deals in Iran for major French companies.

The problem, say business leaders, is a disconnect between Europe and the U.S. over Iran sanctions. Nuclear sanctions imposed by the E.U., U.S., and the U.N. over the decade ended in January, after Iran dismantled its centrifuges and rid itself of uranium stockpiles—the key conditions of the nuclear deal last year. In theory, Iran can now sell its oil on world markets, and move money through the global financial-transaction system known as SWIFT, and foreign subsidiaries of U.S. companies can invest in Iran’s $400-billion economy for the first time in years (although most will still need permission from the Treasury Department).

Left in place, however, were many other sanctions that Washington has imposed on Iran over the years on the grounds that the country violates human rights and supports terrorism. Since January, Congress has made it clear that those sanctions are there to stay. These restrictions bar American companies from doing businesswith the Iranian government or with any entity that has links to Iran’s Revolutionary Guard Corps. In addition, U.S. financial institutions are barred from dollar transactions involving Iran—a major hurdle for all global companies, since countless transactions pass through a U.S. financial intermediary at some point.

The continued U.S. restrictions, say European executives, have caused serious complications, and are causing fear within some companies that they could run afoul of U.S. law if they invest in Iran. In recent weeks, the confusion has boiled over into frustration.

U.S. officials, two from the State Department and two from the Treasury’s Office of Foreign Assets Control, or OFAC, faced a barrage of questions and skepticism in Paris on Thursday, when they met with major French companies, including Airbus Group AIR 1.90% ,L’Oréal S.A., Thalys and PSA Peugeot Citroën UG 0.95% , to try explain Washington’s rules about investing in Iran.

Billed as a friendly “roundtable” to ease concerns, people instead aired deep frustrations over confusing U.S. policies, according to some who were at the meeting and who spoke to Fortune afterwards; the event was closed to journalists.

A representative from Airbus, for example, said the company faced difficulties in fulfilling Iran’s $25-billion order from January for 118 new airplanes, because some companies involved were fearful about U.S. sanctions; Iran urgently needs to upgrade its national fleet of airplanes, after decades of sanctions. (Boeing last week began its own talks with Iran.) “[The Airbus rep] said okay, we are not ‘U.S. persons,’ but our suppliers come from the U.S., and they don’t want to supply goods headed to Iran,’” said one person who was at Thursday’s meeting.

Other companies described daunting logistical complications in getting Iran deals off the ground. Some complained about a new U.S. rule, introduced in January, requiring anyone who has visited Iran during the past five years—including dozens of European executives—to apply in advance for visas to the U.S. And some said that large financial transactions with Iran are extremely difficult to execute, because no international bank has yet opened in Iran. Most fear the ramifications of violating U.S laws. Last year, BNP Paribas agreed to pay a $8.9 billion fine after the bank pleaded guilty to doing business in Cuba, Sudan, and Iran.

In Washington on Wednesday, Treasury Acting Under Secretary Adam Szubin said the U.S. believes it is “important to keep our promises, and to ensure that the Iranian people see the economic benefits of this deal.” Otherwise, he said, U.S. sanctions might not work in the future to compel governments to change their policies. In an email to Fortune on Thursday, Treasury spokeswoman Elizabeth Bourassa said OFAC officials have briefed business executives in several cities across the world, believing that the investments were “critical to making sure the JCPOA [the acronym for the nuclear deal] is effective.”

Iranian officials and political observers believe the stakes are higher than just business opportunities. If Western investments fail to flow into Iran, they believe, it could jeapordize Iran’s reform program—and perhaps even risk the nuclear deal itself.

Through the U.S. and Europe’s fraught nuclear talks with Iran last year, Rouhani—a liberal reformer keenly in favor of opening to the West—persuaded reluctant conservatives that the country needed to abandon its cherished nuclear program in order to salvage the battered economy. Rouhani faces reelection next Spring, and hardliners, including his virulently anti-Western predecessor, Mahmoud Ahmadinejad, are already voicing their opposition to him.

Last month, Iran’s supreme leader Ali Khamenei—who wields ultimate authority in the country—told a meeting of the ruling clerics that despite the flurry of business interest from European companies, the West could not be trusted. “Visits are made by western sides having no positive effects so far,” he tweeted after a meeting of the Assembly of Experts, a governing body of senior clerics. “Unless results are seen in action, agreement on paper is of no use.”

Amir-Aslani says he warned U.S. officials in Paris on Thursday that conservatives could make a comeback in Iran unless Western companies begin plowing money into the country. “I said, ‘Look, we have six months before things start going in another direction,’” Amir-Aslani said, recounting his conversation in the meeting. “The conservatives will go back and tell people, ‘you promised change, and we see nothing coming in,’” he said. U.S. officials “responded by saying that if there were U.S. sanctions, there are reasons for it,” he said.

For all that, European and Asian executives have poured into Tehran to meet officials and scout for investment opportunities and to move ahead on deals—certain that in the end, the opportunities are huge, in a country with 80 million people, about two-thirds of them younger than 35, and many of them well-educated.

“This is such a historic moment, we feel the history,” Nicholas Notebeart, president of Vinci Airports France, said, sitting in a Tehran hotel in March, when Fortunevisited the country for a week. The company has a contract with Iran’s Airports Authorities to rebuild terminals in Mashhad and Isfahan, cities that expect hugely increased numbers of tourists, with sanctions lifted.

All over Tehran, deals are being discussed—and sometimes signed, too. In another hotel lobby in March, a group of men sat huddled over a pile of documents, sipping cups of tea. After a while, the French executive at the table—Christophe Landais, AccorHotels’ COO for Iran—stood up, shook hands and beamed with delight. He had just agreed to take over four major hotels in Iran, the first step towards building and operating dozens of hotels across the country, he said.

Iranians believe the arrival of American and European companies has the potential not only to do well in Iran, and to revive Iran’s economy, but also perhaps to transform the country itself, by instilling Western business practices and standards, undercutting corruption and tilting the country towards the West.

“Once Western factories are here, you will have a lot more influence,” says Nasser Hadian, political science professor at the University of Tehran, sitting in an apartment overlooking Tehran. “Right now we can ignore you,” he says, refering to the U.S. “Sanctions has helped: We have been able to survive. But once you are present massively, nobody can ignore you.”