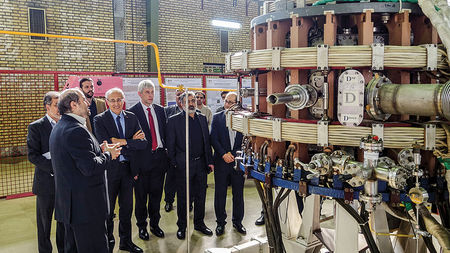 TEHRAN—The Iran nuclear deal was meant to usher in a new era of science cooperation between the Islamic republic and other parties to the landmark agreement, which deters the country from pursuing nuclear weapons in exchange for sanctions relief. But nearly 2 years after implementation began, few projects are underway. And Science has learned that the United States has frozen Iran out of a collaboration that the deal expressly brokered: ITER, the multibillion-dollar fusion experiment in France.

Iran has been poised for months to ink an agreement to join ITER in a limited capacity. “It was all moving well, until President [Donald] Trump took office,” says Ali Akbar Salehi, president of the Atomic Energy Organization of Iran here. An ITER official who requested anonymity because of the matter’s sensitivity confirms that the United States is blocking Iran through its seat on ITER’s governing council, which must approve Iran’s participation unanimously. Bringing Iran into ITER was expected to be straightforward. The long delay, European and Iranian officials say, casts a pall on other scientific collaborations expected under the nuclear deal. An ITER council meeting later this month is expected to take up the issue.

To prevent Iran from developing nuclear weapons, the Joint Comprehensive Plan of Action (JCPOA), as the agreement is formally known, curtails Iran’s uranium enrichment program and mandates the redesign of the Arak research reactor to greatly reduce plutonium production there. Last month, Trump declared that the JCPOA is not in the United States’s national interest; his decertification gave the U.S. Congress 60 days to reevaluate it.