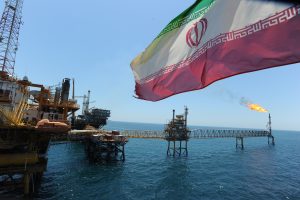 ISTANBUL — When the French energy giant Total signed a landmark gas deal with Iran this month, the company’s chief executive lauded the nearly $5 billion investment as a trailblazing initiative for peace.

“We’re here to build bridges, not walls,” Patrick Pouyanné said in an interview with Agence France-Presse at the signing ceremony in Tehran.

The venture, which includes China’s National Petroleum Corp. and the Iranian company Petropars, will develop the South Pars gas field under a 20-year contract. It is Iran’s the first major energy contract with a European firm since a nuclear deal with world powers lifted sanctions on Iran last year.

Pouyanné’s remarks reflect a broader vision among European leaders for improving ties with Iran, in part by encouraging firms such as Total to invest now that major sanctions are gone. But his comments also highlight the growing rift between the United States and Europe over how to engage with Iran, which the Trump administration has identified as a global menace and singled out for sanctions and isolation.

Since Donald Trump took office, Europe and the United States have pursued increasingly different courses on Iran, casting doubt over the future of the nuclear accord, which limits Iranian nuclear activities in exchange for sanctions relief and other trade.

For Europe, the nuclear deal negotiated in 2015 has facilitated relations with a key if problematic player in the Middle East, while opening a vast consumer and energy market to European companies.

Many European banks and firms have been reluctant to jump in, but French, German and Italian companies have also invested in everything from renewable energy to luxury hotels and auto manufacturing. On Thursday, the French company that makes Peugeot and Citroen cars said its sales nearly tripled in the Middle East and Africa in the first half of the year because of new production in Iran.

“The Europeans are returning, the Chinese are returning, the Russians, Ukrainians — it’s all over the place,” said Fabien Dany, a Tehran-based consultant who advises companies on the Iranian market. “There are very big companies with appetites for investment” in Iran, he said. “And they’re going through with it.”

But in Washington, the agreement, which was negotiated by the Obama administration, has been portrayed as a boon for a repressive regime that threatens the region. Some in the White House are pushing for harsher measures against Iran, which they say should not go unpunished for activities such as ballistic-missile development.

In April, the administration informed Congress that Iran was in compliance with the deal, a certification it must make every 90 days. But it also put the accord under review — with the option to abandon it entirely. On Monday, the administration plans to certify again. Officials have said the policy review should be completed before the next certification is due in October.

In the meantime, the Treasury Department has not even said whether it will allow companies such as Boeing to do business with Iran, despite potential sales the firm says would create tens of thousands of American jobs.

“There is a clear division between where the Europeans are going and where the Americans are going on Iran,” said Ellie Geranmayeh, senior policy fellow at the European Council on Foreign Relations. “The Europeans have embarked on a path of rapprochement. The U.S. is looking at a policy of isolationism and containment.”

The optics of Total’s $4.8 billion investment, which analysts say has the backing of the French government, “were seen as, ‘We’re going ahead despite all the uncertainties of the U.S. administration,’ ” Geranmayeh said. “The Europeans are messaging: ‘Our foreign policy on Iran now is different to yours in Washington. We’re not just going to automatically follow suit.’ ”

Source: The United States and Europe are on a collision course over Iran – The Washington Post

Why Total’s gas deal with Iran is so important for the country’s future
Iran’s Forces Battle ISIS, Other Militants and Friendly Fire in Two Days of Action